Despite a letter of opposition from some residents and an argument from attorney Grant Woods, the Maricopa Planning & Zoning Commission recommended a use permit for Apex Motor Club Monday.

Owned by Private Motorsports Group, Apex is planned as a private club where members can try out their luxury sports cars. The property is 280 acres sitting west of Ak-Chin Southern Dunes and north of State Route 238 and the Union Pacific Railroad tracks. Trains played a role in the request to grant the permit.

The application required a noise study because Apex will have high-performance cars driving fast on a road course within the property. For the noise study, decibel readings were taken at the railroad tracks and, for comparison, at Wild Horse Pass Motorsports Complex, where there is open-wheel and other types of racing.

The study found the trains were louder than the racecars would be.

Saying he was speaking on behalf of several business owners in the area, Woods dismissed the acoustics analysis as “a three-page alleged noise study” that could have been completed for $100. But Commissioner Bryon Joyce, an architect, said it was a “very complete report.”

Woods said Apex’s development process was being rushed through without proper planning or consideration of “serious ramifications.” He said city staff members “haven’t done the work.”

City planner Rodolfo Lopez said Apex followed all codes and procedures. Apex Motor Sports President Jason Plotke said the group has never made a secret of its plans in Maricopa and had news stories written about the development last fall.

By code, there had to be notification of Maricopa property owners within 300 feet of the parcel, a site posting, public notice, neighborhood meeting and public hearing. Commissioner Leon Potter said he was concerned Ak-Chin Indian Community, being outside but sandwiched by city limits, might not have been included in the process.

Commissioner Bob Marsh brought up the nearby golf course in what has been a relatively quiet area aside from the trains.

“I hope the council will consider Ak-Chin’s input going forward,” he said.

Lopez said Apex has been asked to inform both Ak-Chin and the Gila River Indian Community, which borders the property on the north side.

Cameron Carter of Rose Law Group, representing Private Motorsports Group, estimated the $30 million project will employ 150 people during the three-phase construction and permanently hire another 30 workers as staff. The project plans include a clubhouse, garage condos, maintenance department and track.

Part of the recommended use permit included a traffic study, as well. Woods argued there could be a large impact on the highway.

Commissioner Jim Irving said he understood the neighbors’ concerns “but people won’t be flooding out there, because it’s private.” 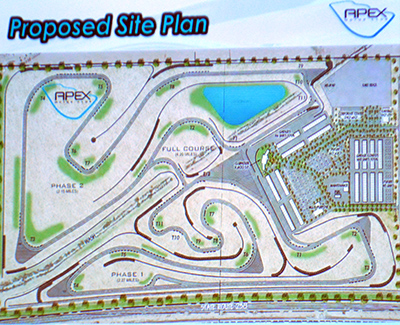 The next development hearing on the project will include a report on drainage.

Lopez said the coincidence of having the golf course and a sky-diving business nearby had created “a unique corridor of activities.” Commission Chairperson Linda Huggins said she looked at it as a “fun area.”

With Commissioner Ted Yocum absent, the commission voted 6-0 to recommend approval of the use permit to city council. Four members of the city council attended Monday’s meeting, and Mayor Christian Price was also in the building. 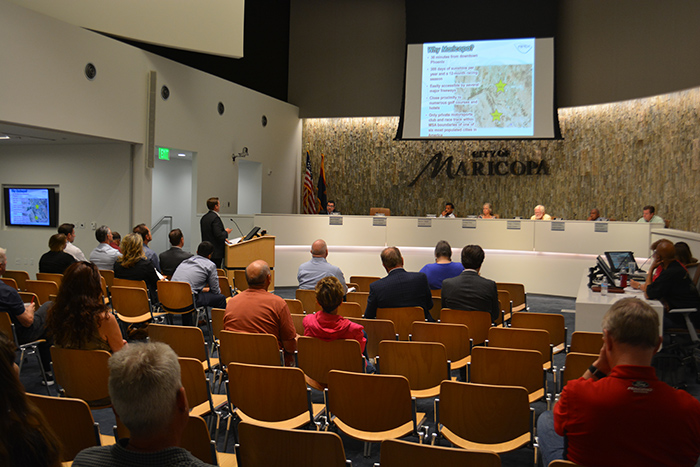