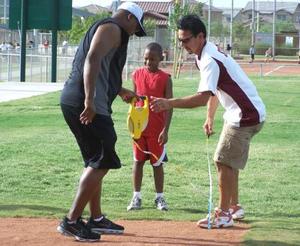 Five children from Maricopa collected gold medals at the Junior Olympics Regional Competition held at Pacana Park on Sunday. They will be heading to California for the national championships in July.

Local competition organizer David Aviles said he was expecting a turnout of 70 children from across the state to participate in the event but was shocked when the total turnout topped out at 16.

“Almost all of the kids that showed up were from Maricopa,” he said.

Aviles said he spoke to a person at the city of Gilbert, which was the host for last year’s competition and found out they had a less then stellar showing also. “It is weird that people don’t show up for this,” he said.

Aviles said he sent reminder notices out to the cities that had participating athletes, but it did not translate into participation (see related story).

The gold medal winners and a chaperone of their choice will receive an all expenses paid trip to national competition, which will be July 23 to 26 at the Olympic Training Center in Chula Vista, Calif.