A café/convenience store/gas station/tobacco shop is one of the most unique dining experiences in the Maricopa area. And its manager wants to expand on its uniqueness.

Vekol Market, open since 2012, serves up food cooked in front of customers. Located in the Ak-Chin Indian Community on Farrell Road, it draws a variety of customers with a variety of needs.

A favorite for many, according to manager Susan Guerin, is the low cigarette prices. “But surprisingly enough, and what I enjoy, is the deli,” she said. “A lot of people love it. We get a lot of compliments from first-time customers about the deli, and a majority of the items are freshly made.”

Married with three children, Guerin is a member of the Ak-Chin Indian Community. She started in tribal gaming and worked retail at a Walgreens in Phoenix before joining the staff at Vekol Market as an assistant store manager.

“Then I just stepped up,” she said.

“I feel like it’s going to continue to grow. There’s so much more we can do,” Guerin said. “We’re trying to expand our catering services. And we want to use our barbecue trailer more.”

She gives a lot of credit to deli supervisor Brandy Rivera, who is in charge of the burgers, burritos and pizza coming out of the kitchen as well as the bakery and catering.

“When it first opened, we were going to be a small café. As time went on, we had people requesting things,” she said.

Guerin said Rivera has been “amazing” about making items fresh.

“She comes up with new ideas all the time,” Guerin said. “When we have caterings, she doesn’t like to keep it set at the same menu. She’ll basically do whatever you request.”

Guerin estimates 75 percent of Vekol Market’s customers come from Maricopa, with other visitors being snowbirds or smokers coming from Casa Grande and even Tempe for tobacco products.

“We’ve been open 5 years and we’re still getting people who just heard about us,” she said.

The store manager lauded her crew of deli clerks for their hard work whipping up meals from scratch. She has changed little on the surface at Vekol Market since becoming manager, but there is a special focus behind the scenes.

“Everything’s basically stayed the same. It’s just more of a teamwork concept, get everybody to work together, get everybody trained correctly so it’s more uniform and everybody knows exactly what’s being done,” she said. “Just trying to keep everything fair for everyone.” 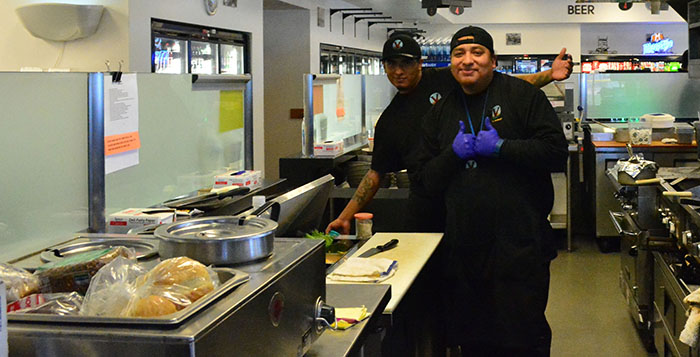