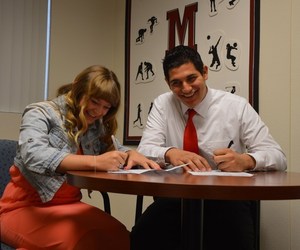 Two Maricopa High School seniors picked up their pens on National Signing Day Wednesday and committed to playing sports at the next level.

“I’m so proud of both these kids,” said Cory Nenaber, the school’s athletic director and head football coach. “To see them grow over the last four years and become really leaders of our school culture as well as the athletic program, it’s something that we’re very proud of. It’s a great day for Maricopa High School.”

Palafox, an offensive lineman for the Rams, said ACU’s fresh new football program attracted him to the private, Christian university. ACU announced in September it would start an intercollegiate football program next fall – the first non-Division 1, four-year college program in the state.

Palafox said helping shape the university program would be similar to his experience at Maricopa High School. Nenaber, who recently took the head coaching job at Corona Del Sol High School in Tempe, started coaching at Maricopa when Palafox was a freshman.

“I look forward to being able to build a culture at Arizona Christian,” Palafox said. “Start a foundation for their football program.”

Palafox’s dad, Mark Yonts, said playing football has been a longtime dream for his son.

“He’s really been focused and driven not only just on football but keeping his grades up,” Yonts said. “This is a great opportunity for him.”

The high school senior said his position at ACU currently is unclear. Moncel, a catcher for the Rams’ softball team, said she’ll have the same position on the field at Colby Community College.

Her senior season with the Rams will begin at the end of the month. She said having already committed to a school takes some of the pressure off.

“Of course I’m going to do my best during the season,” she said. “But I don’t have to worry about proving to anyone I’m good enough to be on your team.”

If things go well in Kansas, Moncel said she hopes to go to the University of Illinois to play softball for another two years. She is from the Midwest state.

“It’s always been my dream to go there,” she said.

Moncel’s mother, Lois, also said her daughter’s had a longtime dream of playing at the collegiate level.

“It’s really exciting and we’re really proud of her,” she said. “She’s worked hard to get here.”