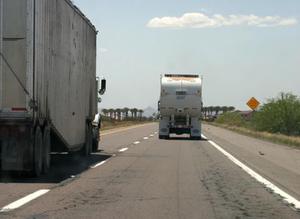 Meadow Valley Corporation is slated to repave portions of State Route 347 in Maricopa County this summer after winning a $5.8 million contract from the Arizona Department of Transportation.

They said they will pave from mile post 173.96 south of Edison Road and stop at the county line.

Project sponsor Mark Krumm said they expect to start this summer after plans are finalized with ADOTs Tucson division.

He said the project will last for two to three months and that they hope to get started in May, since the contract goes into effect May 23.

The company plans to do hot-in-place recycling of the asphalt – a process where heaters heat up existing asphalt and reuse it. Krumm said that portion is expected to take about a month. He said that they will apply regular asphalt as well.

In addition, Krumm said they will increase the turning radius on Casa Blanca Road by widening the turn lane.

Meadow Valley Corporation is based in Phoenix and is engaged in the construction industry as both a contractor and a supplier of construction materials.

The Company’s construction services segment specializes in structural concrete construction of highway bridges and overpasses, and the paving of highways and airport runways, primarily in Nevada and Arizona.