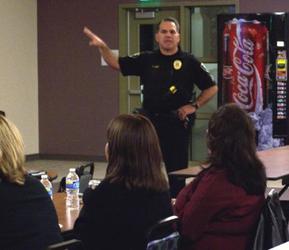 Perez provided an overview of what parents can do to help their children and encourage good study habits at home.

“As parents we tend to believe that at the elementary level kids need us more,” said Reese, adding that adolescents need their parents more than ever and encouraging parents to get involved at the middle school level.

Huffman asked parents to make a difference by being a role model for their children. Even when parents give advice, said Huffman, “Children may roll their eyes, but they’re listening and it sinks in.” He added, “They need mom and dad; they need support, and we want to do our jobs to make your children successful.”

Judd talked about gateway drugs, those that generally are used first by teens. They include marijuana, tobacco and alcohol. Average first use for marijuana is at age 13.6 years, at age 10 for tobacco and at age 12.5 for alcohol, generally beer. According to Judd, statistics show that teens are 60 percent more likely to use marijuana if they drink or smoke. They are 120 percent more likely to try harder drugs if they have used marijuana.

Following his presentation, Judd was available to answer questions from the audience.

Refreshments were served to parents or guardians and the children who attended. In addition, several lucky winners took home $25 gift cards to Wal-Mart.