Arizona is out of the recession – at least according to labor statistics.

Experts predicted the end of the recession as long ago as 2010 and again in 2013 and again last year. But the employment numbers never backed up those claims until now.

“This month we did actually surpass our pre-recession peak from October 2007,” said Jim Chang, a state demographer with the Administration Department.

That is the month statisticians consider the beginning of the great recession in Arizona. At that time, Arizona had 2,686,000 jobs, but that took a steep dive in December 2007 and subsequent months. Finally, in January of this year, the state was only 4,000 jobs short of finally re-acquiring that level.

In February, the state tabulated 2,688,600 jobs, seasonally adjusted, for the first time since the economic meltdown.

The state’s unemployment is now 5.5 percent, a decrease of a 10th of a percent. Compared to February of last year, Arizona has gained 79,000 jobs in the past year.

Pinal County had a 2.1 percent job gain during the month. Like the state, its unemployment rate is 5.5 percent. 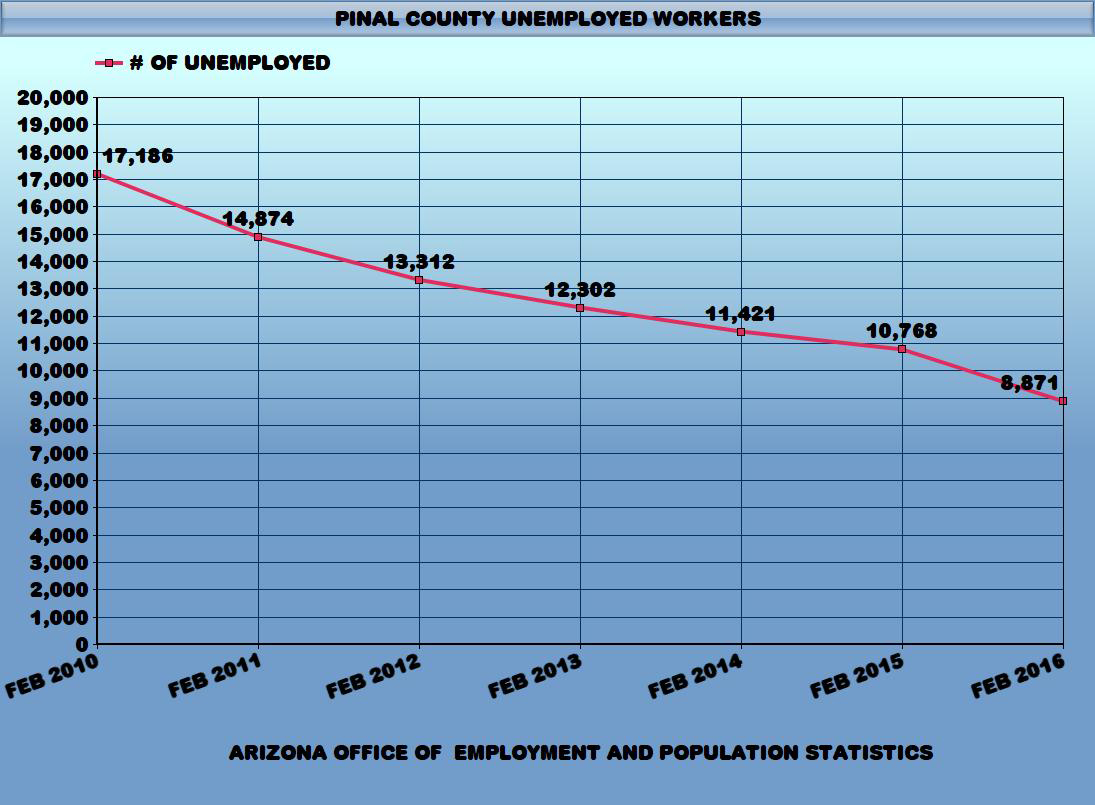 Chang showed the three most recent recession periods. One lasted from January 1990 to November 1991. The second started in March 2001 and was exacerbated by 9/11 and lasted until January ’03.

The third was from October ’07 until February 2016. It hit the United States hard, but Arizona had a particularly difficult struggle to get back on its feet.

“It was much harder here than the U.S.,” Chang said. “And it took much longer to recover.”

The department sees well-rounded growth in almost all sectors and all over the state.

The two-year projections are for more growth in real gross domestic product, in personal income, employment and retail sales. Because it has had to work so hard to get out of a deeper hole, Arizona’s growth is outpacing the nation’s, and that is forecast to continue.

Construction, the industry most damaged by the recession in Arizona, is expected to have the largest percentage gain of 6.6. Eleven of 12 sectors are predicted to add jobs.

In the “Phoenix area,” which includes Maricopa and Pinal counties, last year’s growth rate was 2.9 percent. Over the next two years, that is projected to be 3.15 percent.