“I’m Mexican American, and so I base a lot of Latin American designs and geometric silhouettes in wearable art.” — Angelina Martin

Martin has owned AnymMystik Art & Apparel, a home-based design studio in Maricopa, since 2016, but she has spent a lifetime creating.

“Some of it is ready-to-wear apparel where you can wear it all day and then take it home and wash it,” she said. “And then some of it is paint.”

Her garments are always colorful and often incorporate large bold images like a guitar or a cat’s face. She uses recycled material, cast-offs given to eco-fashion designers by fabric manufacturers. An instructor for eight years at The Art Institute, Mart employs techniques in quilting and layering for constructing garments and may combine that with painted textiles.

“The painting, the quilting, the layers, the various textures kind of sum up my whole wearable art in fashion,” Martin said.

Feedback from fashion shows indicates she should include more painting, and listening to potential customers can impact her direction.

She was one of seven designers participating in the first Arizona Eco Fashion Week in April at the Fashion and Business Resource Innovation Center (FABRIC) in Tempe. That is the home of the Arizona Apparel Foundation and is built to foster and network local designers.

Its goal is “to be Arizona’s first and most comprehensive resource for independent fashion companies that connects them to each other, to the community and to all of the fashion-related services that they need to operate and grow their business.”

“They manufacture small lots for people,” she said. “People go in there with their ideas and then they literally help you from the beginning doing the technical… from choosing patterns, to cutting it and making it for you.”

Earning her spot in fashion shows has also been a boon.

“I did Phoenix Fashion Week, and then after that opportunities kept coming,” she said. “People kept asking me to do their shows.”

The reasons go beyond the creative.

“I’m always on time and always organized. I have the tag with the model’s name, the order they’re walking in. And then I see the chaos of everyone else. You see the fashion sub-culture. You mix the hair, the models, the designers, the makeup, all those people, all those artists, and you see some craziness. I just stand there and don’t say a word and mind my own business. I think that’s why.”

Martin has two master’s degrees. She was working on her Master of Fine Art at University California-Davis when she had her son Collin.

“Everyone thought I was the Mexican nanny,” she said. “I would walk around campus with him, and they’d ask ‘Oh, who are you babysitting for?’ I’d say, ‘That’s my kid. Just because he has blond hair and green eyes, it doesn’t mean I can’t claim him.” 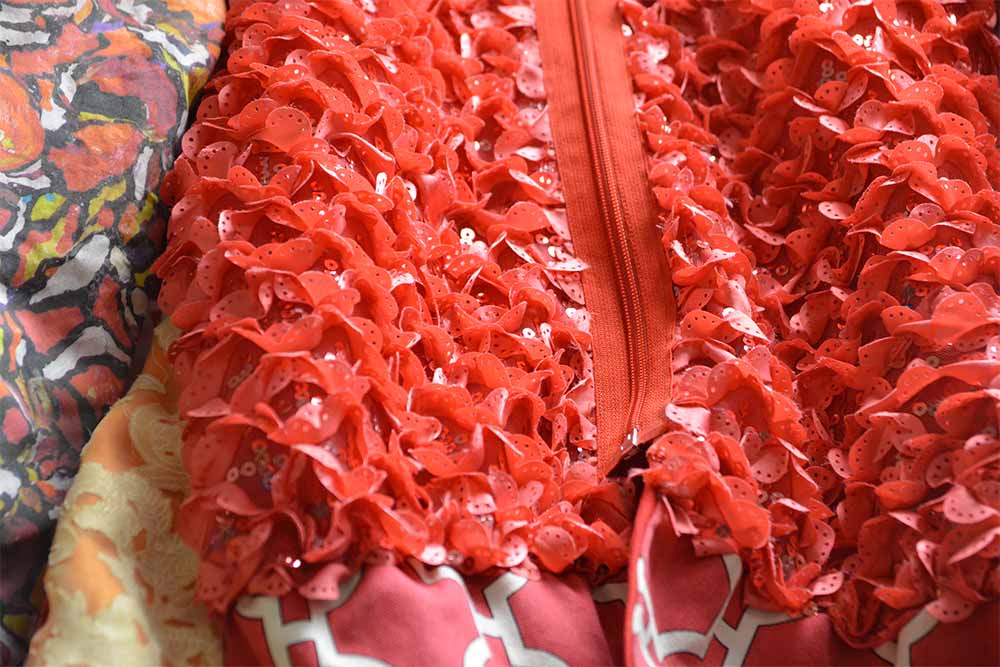 In his own way, her son has become part of the business. Collin and his friends have modeled Angelina’s clothes for her collections. He graduated from Maricopa High School in May.

And Martin’s heritage has informed her decisions as a designer and artist, notably creating a “coral creature” sculpture that was photographed and turned into a print.

“I’m Mexican American, and so I base a lot of Latin American designs and geometric silhouettes in wearable art,” Martin said. “And that’s where I got the coral creature. I was learning about Mayan rubber process and Mayan leather making. It’s reed and wire with fabric wrapped around it and rubberized with a Mayan latex rubberizing process.”

Two years after earning her first master’s degree, Martin became an instructor and director at The Art Institute. She first taught in Austin, Texas, then in Sacramento, California.

She earned a Master of Humanities in art and visual media at Tiffin University in 2015. “And that’s when I focused on digital prints. So, it’s been within the last two years that I’ve really pushed the boundaries and discovered who I wanted to be.”