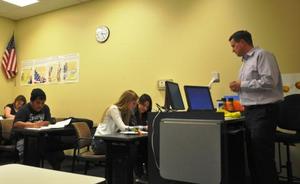 Public sector development is about to spill over into the private sector in a big way as Central Arizona College gears up to break ground later this year on a Maricopa campus that could one day serve 15,000 students and employ more than 1,000 faculty and staff members, bringing tremendous economic benefit to the city.

While there is no specific data on the economic impact the new CAC campus will have on the city of Maricopa, studies conducted across the country on similar-size institutions provide a basis for projections.

One such study completed in January 2011 looked at the impact of Blinn College, a two-year institution in Brazos County, Texas. According to Blinn College Provost Ted Raspiller, the study showed Blinn, which has 885 employees and 12,000 students, generates more than $94 million a year for the local economy.

Another study from Texas released in November, “Moving Texas Forward,” reports Texas taxpayers see a rate of return of 6.9 percent on their investment in community colleges and that Texas sees an annual addition to its gross state product of $1.6 billion from these institutions.

The report says every dollar of state and local tax money invested in community colleges yields $28 in cumulative benefits that eventually accrue to residents as added income and avoided social costs.

Workforce growth is key
To formulate these impact figures, studies typically look at growth in the quantity and quality of a
regional workforce, according to Kjell Christophersen, senior economist with Economic Modeling Specialists, Inc.

Christophersen’s firm has conducted studies for more than 1,000 community college districts and is considered the foremost expert on modeling colleges’ economic impacts. “Typically 70 to 80 percent of the students who attend a community college are from the region and will remain in the area when they finish their education,” said Christophersen. “That kind of educated workforce creates higher earning potential and a larger tax base.”

Besides increasing regional earning, Christophersen said community colleges are economically beneficial due to money the colleges spend in communities, jobs they provide for teachers and other staff members and dollars spent by students and staff on local goods and services.

Capitalizing on education
Christophersen said the positive impact of a college is reduced if students move out of town after graduating. To capture the skilled workforce the new CAC campus will produce and fully capitalize on its economic benefits, the city of Maricopa will need to attract employers for those students.

Happily, this is a proposition the college will empower, according to Maricopa Economic Development Director Danielle Casey. “Higher education is one of the top three site selection requirements companies look at,” Casey said. “Having a college here can only make Maricopa more attractive to potential employers. It will also help generate a measure of retail and entertainment.”

Jim Rives, president and CEO of the Maricopa Economic Development Alliance, a nonprofit organization that works to attract employers, backed up Casey’s assessment.

“CAC’s willingness to make a large investment in the city of Maricopa is sending a strong message to companies looking at Maricopa,” Rives said. “The school not only brings a big investment in the campus and facilities, but also creates options for the city to improve the skills of residents.”

“The immediate economic impact will be in at least two areas,” said Jim Rhodes, director of CAC’s Small Business Development Center. “First will be the actual construction jobs, some of which will employ Maricopa residents. Next, construction will engender development of numerous ancillary support businesses, such as stores, restaurants, medical offices, cleaners.” Many of these will be owned by residents of Maricopa. In the longer term, businesses in areas such hospitality
and entertainment will develop.”

Jim Rounds, an economist with Elliott Pollack and Company, agrees that the employment and fiscal benefits of the construction phase will be substantial, but he is less certain about the about the future ability of the college to attract employment on its own.

“Permanent college jobs will help diversify the employment base, and easier access to technical and job training could be a lure in terms of business recruitment,” he said. “But this amenity will have to be packaged with other community assets; alone this will not be a game-changer. The city’s current workforce is already highly skilled, so it is less about correcting for a current deficiency and more about assuring efficient development going forward.”

A version of this article appeared previously in InMarciopa News.