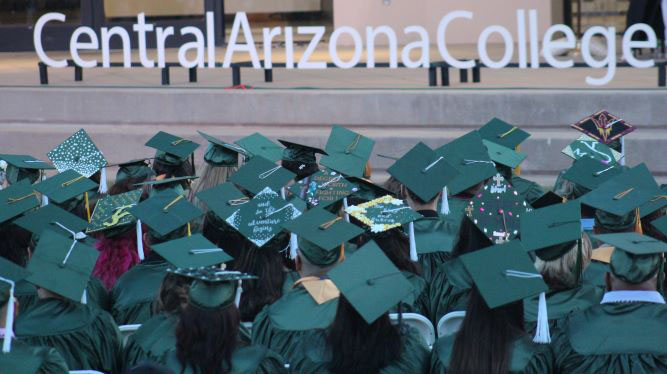 Central Arizona College recognized the accomplishments of its graduates during a district commencement ceremony May 10 at the Signal Peak Campus.

Two student speakers, Ashley Keepers of Tonapah and Kaira Cortez of San Tan Valley, were nominated and selected by the college community to address their peers.

Keepers is the first female student to receive a certificate in the structural welding program. She was president of the American Welding Society student chapter and became a member of Phi Theta Kappa.

Cortez worked in student services at the San Tan Campus. She was involved with National Society of Leadership and Success, Book Connections Club, DREAMers Club, Campus Activities Board and the Honors Program. Additionally, she served as an officer in Phi Theta Kappa, and this year, was district president of the CAC Student Government Association.

Faculty senate president Clark Vangilder presented the candidates to the CAC Governing Board, which conferred the degrees and certificates. President Dr. Jackie Elliott along with governing board members congratulated graduates as they crossed the stage.

The oldest person to be awarded a degree or certificate this year is 67 and the youngest is 17. Ten students graduated from CAC before graduating from high school since their ceremonies are not until later in May. The number of male graduates is 276 while the number of female graduates is 492.  The total number of degrees and certificates awarded by Central Arizona College in its 49 years is 26,173 given to 18,768 individuals.

Previously held Student Awards of Excellence at the Maricopa campus recognized students for their outstanding academic and co-curricular achievements. Faculty of the Year were also named at each campus.

The CAC chapter of the National Society of Leadership & Success (NSLS) held its spring induction and awards ceremony April 23, marking the end of the Society’s inaugural year at CAC.

CAC’s Chapter of the NSLS was established in August 2018. In its first year on campus, 302 students joined. Ninety-one students completed the program in the fall and another fifty-nine were added as inducted members this spring. New inductees received a Certificate of Leadership Training honoring their achievement and lifetime membership in the NSLS.

The NSLS is the nation’s largest leadership society with 950,000 members representing 700 universities and colleges nationwide. In addition to honoring excellence, the NSLS provides a systematic program for members to build their leadership skills through participation on their campus.