“He’d always had a quickening of the heart when he crossed into Arizona and beheld the cactus country. This was as the desert should be, this was the desert of the

About the Saguaro
Size: Average 30 feet (largest cactus species in the United States)
Longevity: 150-200 years
Habitat: Sonoran Desert
Blooming period: May and June
–Desert Botanical Garden
The rules regarding saguaro and other protected native plants can be found at Agriculture.AZ.gov.
Permits can be obtained at the Phoenix Office of the Agricultural Department, 1688 W. Adams St., 602-542-3578.
Scott Schade can be reached at 520-628-6317 or sschade@azda.gov.

picture books, with the land unrolled to the farthest distant horizon hills, with saguaro standing sentinel in their strange chessboard pattern, towering supinely above the fans of ocotillo and brushy mesquite.” – Dorothy B. Hughes

When Michael Headrick purchased saguaro skeletons two years ago, he created a notarized note indicating where and from whom he had acquired them, “just to be sure.”

Arizona loves its cactus, especially its saguaro. So much so, there are protections built into state law.

Headrick, who has lived in Rancho El Dorado nine years, loves cactus, too, and has made them an integral part of his landscaping – and his interior decorating. People just passing by his property have called it “the cactus house” because of the forest of 15-foot cacti out front. They haven’t seen the inside.

Saguaro skeletons and pieces of skeletons are installed in his living room, lighted from within for dramatic effect.

“I like saguaro,” Headrick said. “It’s extremely hard wood, and it’s a big job to clean them up. They’ve got old dry stuff inside, and you’ve got to get that stuff out, drill a hole in the bottom so you can run your lights through. I put them in the driveway and I bleach them with Clorox. Then I leave them outside all day long and they turn real white. They look a lot better than they did before.”

An aficionado of stained glass, he then had an epiphany.

“I thought, ‘Why don’t I try to put a stained-glass window in one of these?’” he said. “It came out very nice.” 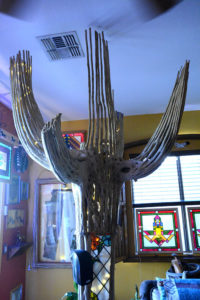 Cactus-as-art started with acquiring the skeletons in the first place. That happened when Headrick met a Mesa rancher willing to part ways with his saguaro wood.

“Wherever I live, I try to bring that into my house,” he said. “When I lived in Hawaii, I decorated with surfboards and things that had to do with the ocean. I couldn’t see living in Phoenix and decorating my house with Chicago stuff.”

Saguaro skeletons do not come with the legal requirements attached to live cactus. As long as permission is given by the landowner to access the property, whether private or federal, anyone can remove cactus wood. The state’s caution is that doing so could disturb habitat and interfere with soil fertility.

Laws of the Living

However, take a live cactus without proper authority and you may meet Scott Schade of the Office of Special Investigations.

It’s illegal to harm a saguaro, and moving one requires special paperwork. Schade said when people get in trouble acquiring a saguaro, it’s usually something basic. “Transporting it without a permit,” he said, is the top infraction.

A tag for a saguaro is $8. Tags for other protected plants cost $6. Investigators get called in for suspicious activity like trespassing, when movement tags are not obvious on protected plants being moved or when someone is trying to sell a wild saguaro without documentation. Legal ramifications depend on the “violation gravity factor,” according to the Arizona Administrative Code.

Landowners hauling a rotted saguaro to the landfill do not need a moving permit, he said.

If you want to raise your own, saguaros grow from seeds, not cuttings, and they grow slowly. A 10-year-old cactus may be less than two inches high, meaning they can be grown indoors for a very long time before needing a transfer. 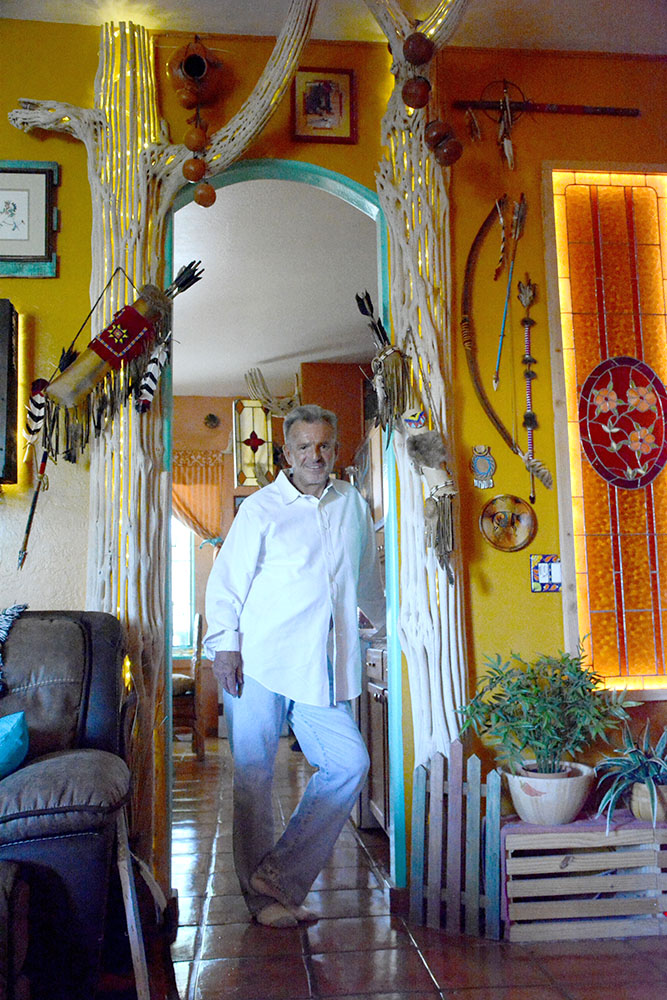 Headrick educated himself on the such laws before adding saguaro remains to his décor, which is a collection of western and Native American art, handmade furnishings, antiques and do-dads. He has given old radios the same treatment as the cactus skeletons, replacing audio panels with stained glass. He even has charred wood from old Maricopa buildings.

“You could sit in here for an hour and not see everything,” he said.

Headrick, 65, came to Maricopa in a roundabout way. He grew up in Chicago and first discovered Arizona when he was 28. He said he lived off dividends from trading options as a silent partner for years. He was living the high life in Arizona, California and Hawaii until his partner was indicted in a Ponzi scheme, wiping out his income.

His whole life downsized. He went back to work and moved.

“Maricopa was the only place I could afford to have a pool,” he said. “I sold my house two weeks before the crash for very top dollar, and I bought this house for very bottom dollar.”

He eventually took a job working the ramps at Southwest Airlines, and then worked almost 30 years as a credit card fraud analyst for Bank of America, from which he retired four years ago. He has kept up his own art, which informs his style of exterior and interior design.

“It’s very western out back,” Headrick said of a backyard that includes an OK Corral and cholla skeletons.

“When an arm starts protruding toward the driveway and it’s time to cut it off,” he said, “you just cut it off, lay it on the ground, let it sit for 24 hours, dig a hole about a foot deep, drop it in there, give it a little bit of water and leave it alone.”

He also has a front “hedge” made of 25 elephant ear plants he nurtured for four years before cutting into a hedge shape.

Herb-alicious tips from garden to table