Senior John Blodgett was recognized by the Maricopa Unified School District Governing Board Wednesday after being appointed to West Point Academy. Set to be the co-valedictorian for the class of 2017, Blodgett is a cadet major in Maricopa High School’s Air Force Junior ROTC, a member of the National Honor Society and a student tutor. 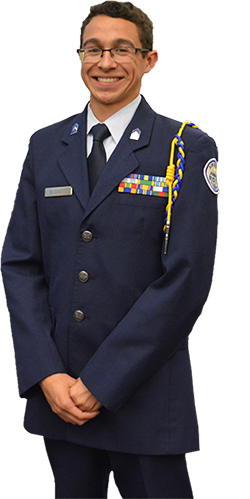 From JrROTC instructor Lt. Col. Allen Kirksey: “He’s a teacher assistant as well. He is part of the first robotics team in Chandler, a member of the Si Se Pueda Foundation, which is a bridge-builder and leader providing programs improving the quality of life for communities, families and children here in Maricopa and in Chandler, empowers children and families to participate in science, technology, college readiness as we mentioned earlier, mentoring, sports, neighborhood revitalization, the arts, lifeskills, education, and in his spare time he tutors. We’ve had the distinct honor of having him in our program for the past four years. I’ve been there since April, and this is his first full year with me. I suspect he’s going to tell you he lost a little bit of weight with me. The position that he held with us was division support squadron commander. The reason I’m saying commander with emphasis; this young man is going to be a commander some day. We have a couple of sections that work underneath him, and those sections were crucial to us passing our ROTC inspection. All the activities I’ve described were accomplished while remaining at the top of his class, currently ranked No. 1 out of 448, and he’s a Boys State delegate, so congratulations to Cadet Major John Blodgett.”