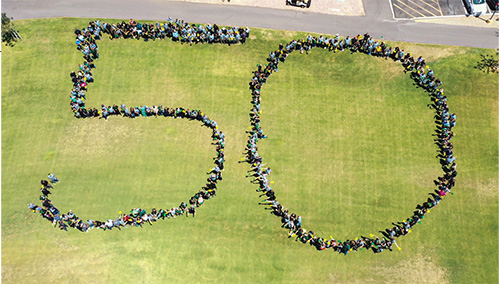 Central Arizona College opened its doors in the fall of 1969 near the base of Signal Peak Mountain in Coolidge, AZ and for 50 years, has been serving and educating the diverse communities of Pinal County by providing accessible, educational, economic, cultural, and personal growth opportunities for those of all ages.

Over the years, CAC has expanded to five campuses and three centers located strategically throughout Pinal County.

During the 1972-73 academic year, the state board for community colleges approved preliminary construction plans for the Arizona College of Technology, now known as the Aravaipa Campus.

Ten years later, CAC began offering classes in Apache Junction, using portables at Apache Junction High School until they moved classes to the Grand Hotel in 1985. In the summer of 1987, the Superstition Mountain Campus opened at its current location.

When voters of Pinal County authorized the college to expand educational opportunities and accessibility throughout the county by approving a nearly $99 million general obligation bond, the College began building two new campuses.

More than 18,800 individuals have received a degree or certificate from CAC since the first graduation ceremony was held in May of 1970.

This item appears in the September issue of InMaricopa.