The vote followed a presentation by the city’s transportation department and a public hearing about plans for developing public transportation in the community.

Council unanimously approved submission of the application for grant funding through the Federal Transit Administration, a grant that has become a mainstay in the city’s transit budget.

Development Services Director Martin Scribner said the federal Section 5311 grant is something they apply for every two years. By continuing to do so, the FTA remains informed about the goals of the city, making it more likely to continue to receive the funds, which make up more than half of the transportation department’s budget.

“This is a great time for us to come and say, ‘Here’s where we’re at right now, here’s where we see going in the very near future,’” Scribner said.

In 2017, the City of Maricopa Express Transit – COMET — saw a growth in ridership of roughly 2,700 more people than in 2016, Transportation Director David Maestas said. That’s a 39-percent increase.

This, Maestas said, follows an overall trend that indicates the city needs to begin to expand transit services. By doing so, he said, the city becomes eligible for more housing tax-credits, which together spurs development.

“There definitely is no question about this,” Maestas said. “There is a strong correlation between development and transportation.”

The route deviation service is more like a typical bus route with 11 stops, each with a scheduled service currently operating between 7 a.m. and 5 p.m. The demand response service is a dial-a-ride type service that offers curbside pick-up and drop-off at specific locations around Maricopa and to any location within five miles of Banner Hospital in Casa Grande or Chandler Regional Medical Center. 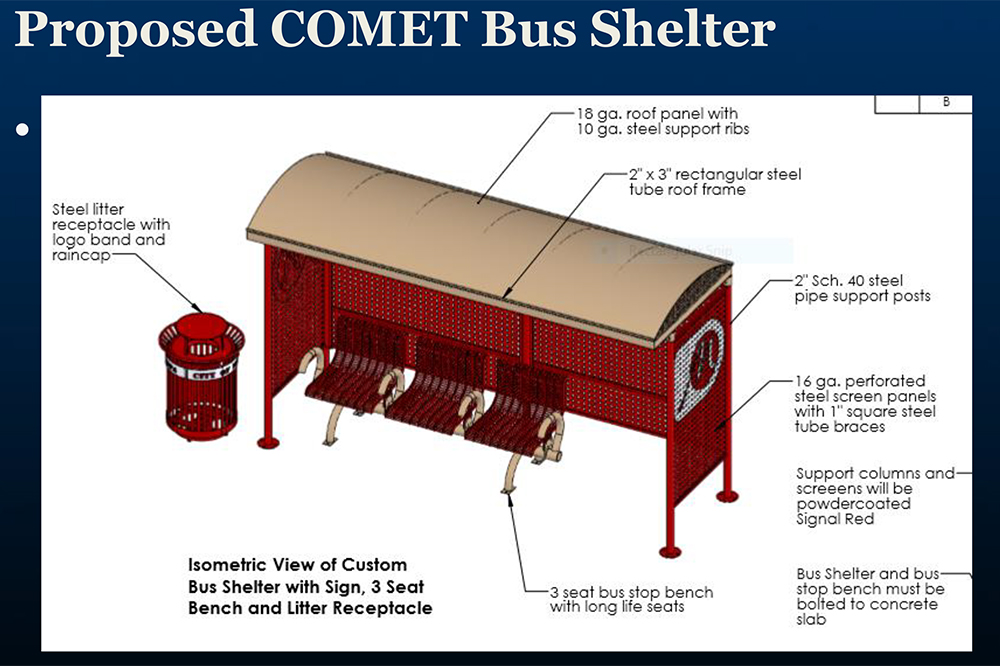 The trend seen with the increase in ridership, Maestas said, indicates a preference to the local scheduled route deviation service.

“We’ve already surpassed demand response and we’re operating conservatively fewer hours, so the trend would suggest to us the efficiency of operating a route deviation service versus demand response,” Maestas said.

As such, the city is hoping to use a combination of federal funds and funds from the recently approved RTA tax to purchase six bus stop shelters to cover all 11 current stops on the scheduled route and have one as a reserve.

Maestas also said, given the uptick in scheduled route riders, the city is looking to possibly expand hours of operation from 7 a.m.–5 p.m. to 6 a.m.–to 6 p.m.

As for the demand response service, trips cost riders only $1 per one-way local-trip and $3 per regional round-trip. Typically, with fewer than five riders for regional trips, which primarily go to hospitals, this is extremely inefficient in terms of cost.

Councilmember Vince Manfredi inquired about alternative options such as rideshare programs like Lyft Uber and Waymo, given that medical trips through those services are typically subsidized by insurance, Medicaid or Medicare.

Considering these options and the relative inefficiency of the regional demand service, Manfredi asked, “At what point do we get to that tipping point where we really do have to look at rideshare services that are doing it more efficiently, quicker, and just better than the government.”

Manfredi has driven for both Uber and Lyft. When asked if shifting toward promoting ridesharing services for medical access transportation instead of a city services, would be a conflict of interest, he said, “I don’t see it as a conflict… I don’t drive for Uber medical.”

The actual service is called Uber Assist and is typically available for the same rate as a regular UberX. From Maricopa to Chandler Regional Medical center, a one-way ride typically costs a rider $20-25. The current cost for COMET regional demand service is $3 dollars per rider for a round trip.

However, Manfredi said, the actual cost to the city is closer to $40-50 per round trip. With typical trips taking fewer than five riders, that means the city is picking up a cost of any where between $25-45 dollars per regional demand trip to the hospital in Chandler.

If there were an increase in demand for the regional demand service, he said, he would support it.

“Once we can get enough people on a bus, maybe it makes sense, but as we sit right now it’s not making sense.”