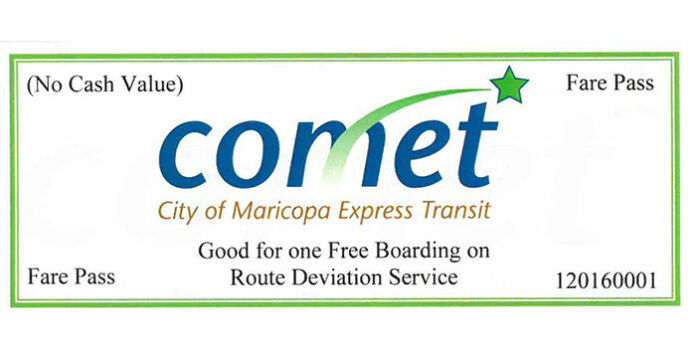 For Maricopa’s transit department, it’s been slow going as staff works out the best approach to gain and serve riders.

City of Maricopa Express Transit (COMET) has been in a constant state of adjustment. It has had steady use of its demand response route, averaging about 50 passengers a week. Its new limited fixed route usually has 7-8 passengers a week.

Now the department is introducing fare passes for the fixed route.

“The pass prevents the driver from having to do the task of making change,” Maestas said. “It’s just practical.”

Rides in the six-passenger minivans are 50 cents each.

Maestas said his department is also working on a program for monthly passes that could involve a discount, but that would have to go before the city council for approval.

The mediocre numbers for the limited fixed route have been a sensitive point for the department. COMET started as a fixed-route system in 2010 but after a year was transitioned to the demand response system.

The new fixed route has been operating for less than a year. Maestas said it is not even established yet and should not be prejudged.

The fixed route is operating without bus stop signage, with the exception of the Central Arizona College campus. Maestas said that is because the route has not been carved in stone.

Development Services hopes to improve the efficiency of the fixed route system by eliminating seldom-used stops at City Hall and the Park-n-Ride. The future overpass may also impact the route.

“One change we are proposing to the route is to change the route to a circular route,” Maestas said. “What that does is it closes the loop without lengthening the hours. It makes it feasible for somebody to have the assurance to go shopping and reasonably be able to get back home.”

“What we really want is not a repeat of things that might have happened in the past,” he said. “We’re trying to edge our way forward, and so far we feel it’s working really well.”

This story appeared in the March issue of InMaricopa News.