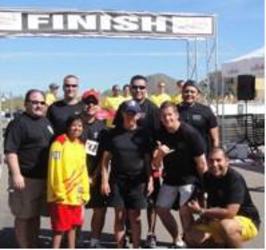 The City of Maricopa Police Association participated in the Red Rock Sprint and Unified Triathlon to benefit Special Olympics, which was held this weekend in Scottsdale.

COMPA sent six athletes and one volunteer to represent the organization and support Special Olympics at the event.

“The event was great fun,” said Aki Stant, COMPA president, who particpated in the triathlon. One of the Maricopa teams took 6th place overall; the other two teams finished 66th and 68th, Stant said.

Stant says COMPA is proud to support Special Olympics and looks forward to many similar events and service opportunities.

COMPA is reaching out for local support with its first annual “Tip a Cop” fundraiser for Special Olympics to be held at the Native New Yorker in Maricopa on Thursday, Sept. 17, from 5 to 11 p.m. Throughout the night, COMPA cops will bus tables, seat patrons and wait on tables. All the tips raised will go to benefit the Special Olympics.