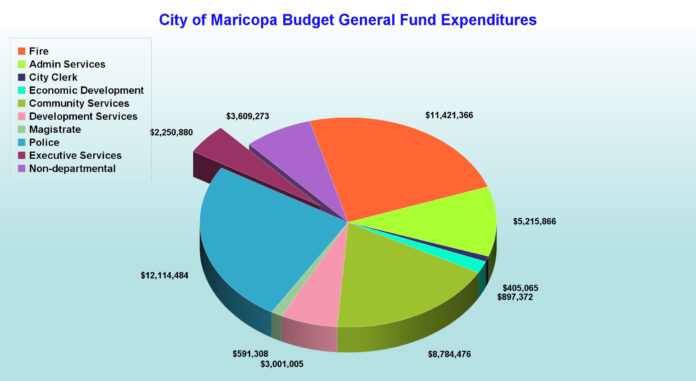 Tuesday, Maricopa City Council unanimously approved its annual budget. The total expenditures of $105.7 million are a decrease from last fiscal year by $935,103.

General Fund revenues are budgeted at $34.6 million, with $11.8 million of that from sales tax. Much of the city’s revenue comes from property taxes.

While the budget for fiscal year 1019-20 wasn’t controversial – members of the council have been hashing out the details of the plan for months – before voting on the measure, Councilwoman Julia Gusse questioned why the city is a member of a Canadian trade organization and not a Mexican trade group.

After more than 15 minutes of discussion about the item that was not originally on the agenda, the final city budget was approved with an amendment to budget $1,500 to join the Arizona-Mexico Commission, if the city council approves it in the coming year. The matter is expected to come up on the next city council agenda June 18.

Council members also adopted the City of Maricopa Strategic Plan for the next two years. The Strategic Plan and is essentially an action plan to guide the city toward the 2040 Vision Plan, City Manager Rick Horst said.

The council also heard the second of two public hearings on a proposed Community Development Block Grant of $180,000 to install lighting and perform some neighborhood rehabilitation and revitalization in the Heritage District. The matter will come before the council one more time before the city will be allowed to apply for the federal grant.

The Council accepted public improvements and maintenance responsibility for all local internal streets within Parcel 19 of the Homestead North Subdivision into the City Street/Road Maintenance System.

The council also recommended the approval to the Arizona Department of Liquor License and Control regarding an application submitted by Kim Kwiatkowski on behalf of Circle K Store at 41433 W. Honeycutt Road. The store already had a license for beer-and-wine sales.