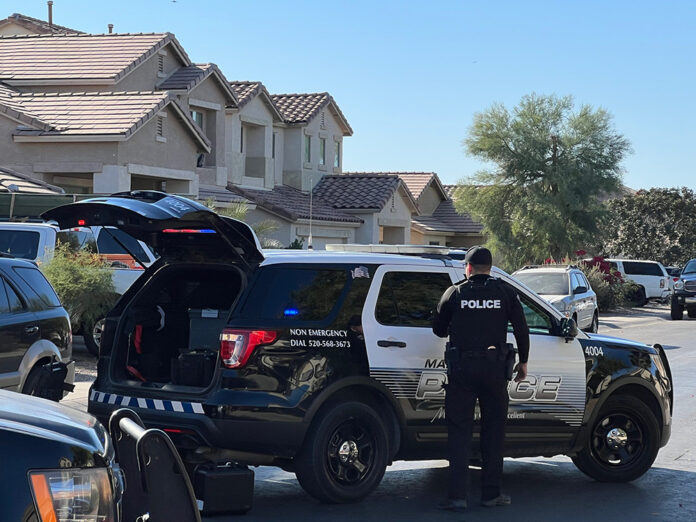 Crime was down in June from May in nearly all categories, Maricopa police Chief James Hughes told City Council during a recent meeting.

Violent crime was down significantly in June. For the third consecutive month there were no homicides, while assaults were down 35% from 40 in May to 26 in June. Sex offenses dropped from 13 in May to just five in June. Two “other” incidents initially reported as kidnappings turned out to be parental custody disputes, Hughes said.

The categories with the most incidents – theft, criminal damage and fraud – were either down or essentially level over May, Hughes said. From May to June, incidents of theft and fraud fell from 48 to 34 and 28 to 18, respectively.

Criminal damage incidents ticked up from 17 to 18, month over month.

Eight burglaries were reported in June, down from 10 in May and “other” crimes against property fell from four to three. Vehicle thefts remained flat at four.

Robberies bucked the downward trend, with three incidents in June following five months with none, Hughes said. Two suspects arrested in the robberies were allegedly involved in both incidents.

Shoplifting makes up 43% of theft calls, mostly at convenience stores, according to the chief.

He added that burglaries consist mostly of items lifted from unlocked cars, and construction materials taken from job sites to either resell or reuse. He said MPD is working with construction companies to deter these thefts.

The final serious crime category is crimes against society, which includes illegal drugs, weapons and other crimes. Drug incidents were down from 54 in May to 49 in June, while weapons violations rose from two to five. There were no “other” calls in June.

Hughes said fentanyl is found in about 12% of drug incidents, evidence that America’s fentanyl problem has come to Maricopa.

Finally, Hughes offered a year-over-year comparison for use-of-force incidents in the department. There were 17 in the first six months of 2021 and 11 in the same period of 2022, a 35% decrease. The most common uses of force were the display of a weapon in 50% of incidents and use of a Taser in 17% of incidents.

There was one fatal officer-involved shooting in the first half of 2022. In January, MPD officer Carmen Nylander fatally shot a homeowner during an incident in Homestead.

Hughes also contradicted popular sentiment on social media that the influx in apartments coming to Maricopa in the next couple of years will fuel a rise in crime.

“We have no correlation that the apartments are raising crime rates at all,” Hughes said. “I believe the last stat I pulled which was a couple of months back, all of the apartments in the city were less than one of our calls for service.”