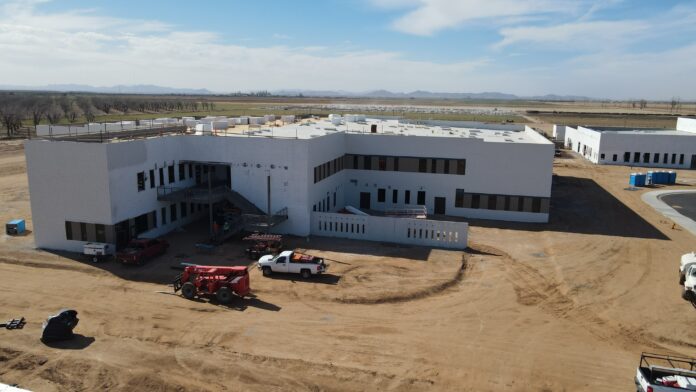 Construction of the city new Desert Sunrise High School is “on time and on budget,” according to Mark Rafferty, a partner with Facilities Management Group, the project manager for Desert Sunrise. The school, located at Farrell and Murphy roads, will open in July for the coming 2022-23 school year with freshman and sophomores only.

Rafferty told the Maricopa Unified School District governing board that the entire second floor roof of the classroom building, which was only half done at the time of the district’s beam signing ceremony Jan. 6, is now complete.

“When we were there three weeks ago, we were just starting to set the trusses on the south side of the building,” Rafferty said. “Now all the trusses are completed, the roof sheeting is in place and all the foam insulation has been done on the entire building. All of the roof foam, all of the parapet flashing is in. In other words, we could have a winter monsoon, anything could happen, and it won’t affect the progress inside. They can start hanging more drywall now that there is no risk of rain penetration. That’s a really important milestone, it’s called being ‘dried in.’”

He added that all of the trusses on the gymnasium/cafeteria building will be set and the building ‘topped out’ by Jan. 28. Other milestones Rafferty noted were the completion of the underground plumbing and the pouring of the foundation slab for the Student Services building

He added that in just three weeks since the beam signing ceremony, and the paving of the parking lot, which began that day, has been completed for a week.

Governing board president Robert Downey said he is impressed not only by the progress taking place now, but the district’s foresight in developing the project.

“The fact that the district a few years ago put up additional money that converted this school from being a brick and wood 30-year school to a brick and masonry 100-year school,” Downey said. “It was evident last week that even when we see it in July was going to be impressive but in two or three years it’s going to be a very impressive school for this community that’s going to last 100 years.”

Torri Anderson of the governing board summed up the board’s reactions to the rapid progress.

“It’s impressive the way it’s going up so quickly,” Anderson said. “It’s been fun to watch.”