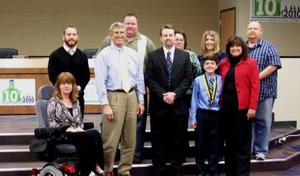 A medal ceremony took place Wednesday, not in Vancouver, but at the MUSD governing board meeting.

Pearce is Arizona’s middle school winner in the Prudential national program, which honors one middle school student and one high school student from each of the 50 states and the District of Columbia. He will also receive $1,000. Ron Phillips, representing Prudential, presented Austen with his medal at the school board meeting.

Pearce’s trip will include a ceremony at the Smithsonian Museum of Natural History, a river cruise on the Potomac, a tour of Capitol Hill and a visit to Arlington Cemetery.

Austen said he is most excited about Capitol Hill, but he is also interested in Arlington. “Isn’t that where John F. Kennedy is buried?” he asked.

His mother, Marlene, will accompany him as part of an all-expense paid trip for the student and one parent. The river cruise sounds “great” to her.

Joe Veres, Austen’s Desert Wind Middle School principal, nominated him for the award. Friday the medal presentation was recreated at the school for the benefit of Austen’s friends and peers.