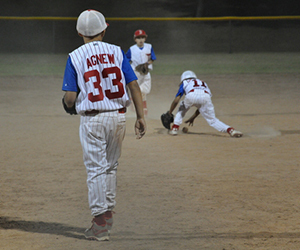 The Dukes 9U team, consisting of players from Maricopa, concluded an exciting playoff run with a 12-8 victory over the Chandler Firebirds to take home the League Championship. As a reward for their play, the entire Dukes 9U team qualified for the PONY All Star Tournament this summer in Scottsdale.

The Dukes traveled to Ahwatukee to play all 15 games this season, including a slate of school night games to wrap up the season.

“I am super proud of these young men,” head coach Marty McDonald said. “The growth in their skill development this season was awesome. Their resolve to play 15 games on the road, with night practices and early games on Saturday mornings, including some doubleheaders, was outstanding. We have a great team with amazing talent that will only continue to get better. I also want to recognize my coaches: Jerry, Randy, Jorge, Shane, John and Steve for their dedication in teaching and coaching these boys.”

Christian “CJ” Arellano led the team in batting average at .588 while Christian Compian finished at .587. Compian paced the team with 5 triples, 3 home runs and slugged 28 RBI’s on the season. The Dukes were aggressive on the base paths stealing 216 bases over 15 games and were led by Cody Gallardo with 35 stolen bags with Maverick McDonald and Josh Stimmel each netting 25 stolen bags apiece.

The Dukes 9U team has a busy summer ahead of them. After finishing third in the Arizona USSSA Spring Championships in Peoria, they travel to Flagstaff over Memorial Day weekend to play in the Triple Crown Sports Memorial Day Challenge against teams from Arizona, Las Vegas and New Mexico.

After that, the Dukes will play in the Arizona PONY State All Stars Tournament in mid-June with a chance to advance to California for regionals and ultimately the PONY World Series. The team will advance to the 10U level of competition later this summer.

“These boys are amazing but we have amazing parents who support their sons tremendously,” McDonald said. “As coaches, we could not ask for a better group of parents and they deserve recognition for shuttling the boys to practices, games and providing an awesome cheering/support environment.”

The Dukes are looking for donations from the local community to help offset tournament and travel expenses. They have set up a GoFundMe account to make donating simple. The Dukes are a 501C-3 organization and can provide tax donation letters for your support. To donate, please visit: http://www.gofundme.com/dukes9ubaseball.