The United States will experience a partial solar eclipse on Aug. 21. 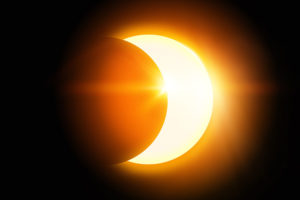 In Maricopa, the moon will obscure 61 percent of the sun, peaking around 10:30 a.m. and ending at noon, according to a Vox report that used data from NASA and the U.S. Naval Observatory.

The celestial event has caused Fry’s Marketplace and Wal-Mart Supercenter to sell out of “eclipse glasses,” the protective eyewear that allows spectators to view the eclipse without risking their eye safety.

According to the Center for Disease Control, looking directly at the sun during an eclipse without proper eyewear can cause permanent damage.

“Without special eye protection, viewing a partial eclipse can cause vision loss, even permanent blindness,” the report said.

To ensure safety, eclipse sunglasses should be compliant with ISO 12312-2 international safety standards.

Virtually all reputable vendors for solar eyewear filters listed on the American Astronomical Society’s website are sold out.

However, the AAS provides pinhole projection ideas on how to safely view the partial eclipse. Using pinhole projection, viewers do not look through the pinhole directly at the eclipse, but instead use the ground or flat surface to view a shadow of it.

The CDC said popular homemade devices used to look directly at the eclipse are not safe.

“Goggles, homemade filters, or sunglasses, even very dark ones, will not protect your eyes. Also, always avoid looking at the sun through an unfiltered camera, smartphone, telescope, or any other optical device,” the report said.

Although finding eclipse sunglasses before Monday will be difficult, some Maricopa residents and students won’t have a problem.

The library received 1,000 eclipse glasses through a grant from the Space Science Institute and the Star-Net Network. Before handing them out to residents Thursday morning, the library gave them away to local schools. Surber said 400 eclipse glasses were split between Desert Wind and Maricopa Wells Middle Schools to students in the blended-learning program.

“During our science classes, students are also being given instructions that Pinal County has provided on how to safely view the eclipse and parent swill receive information via Connect-Ed regarding the same topics,” Maricopa Wells Principal Rick Abel said.

Glasses were also given to middle school students at area charter schools.

Maricopa Unified School District elementary schools will keep students indoors from 9 a.m. to noon, but will “video stream the eclipse live in the multipurpose room at each school for teachers who want their students to be able to observe this event,” according to a statement posted to the district’s social media.

Secondary schools will have regular session, but the statement said staff members will remind students that “the only safe way to look directly at the eclipse is through eclipse glasses with the ISO 12312-2 standard.”