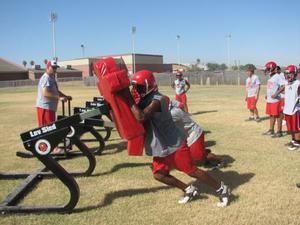 The Maricopa High Football Booster Club is living up to its goals to promote, improve and support the Rams football program in 2007.

Through donations of money and time, the Booster Club has been able to provide the team with the necessities to run a successful program.

More than $10,000 in equipment was purchased by the club at the beginning of the season to help the Rams train, including a five-man sled, blocking dummies and conditioning equipment.

Last year, a similar amount was spent to provide the coaches with video equipment and head phones for communication during the games. The Booster Club also paid for the coaches’ shirts.

But the Booster Club does much more than buy equipment; they coordinate both the breakfasts held at Headquarters before every game and the dinners after away games.

“It’s the greatest experience I’ve had being a part of these kids’ lives,” Shawn Barnicle, the Booster Club president said.

Barnicle said there is a great group of people involved in the Booster Club who help on a regular basis with the concession stand, the meals and the everyday requirements to run the club.

Yet, after all the help the Booster Club has been able to provide, there is still more the football team needs. One of those items is an ice machine.

The school does not have a functioning ice machine for any of the sports to use in the event of injuries. Barnicle said he has consulted with the school for assistance in purchasing a new ice machine but has yet to receive any help.

The club faced a set back in earning the money for a machine when the concession stand was broken into. Several items the club sells were stolen, resulting in a loss of income and frustration.

Purchasing a new, more secure concession stand is another item on the Booster Club’s list of future projects, but, for now, the main focus is to get more people involved in the program.

“Our biggest need right now is support,” Barnicle said. Support can come in the form of money or time, both of which the club needs.

If you are interested in helping, visit the Booster Club’s Web site at www.copagridiron.com.