Fuel prices across the county have dropped significantly as crude oil value has plummeted in response to the COVID-19 pandemic, but the city of Maricopa is seeing gas prices over $1 more expensive than in other states.

Arizona has higher gasoline rates on average, with the city of Maricopa mirroring Maricopa County price ranges instead of Pinal County averages. In turn, parts of Arizona mirror California rates due to gasoline production and travel.

There are several reasons why Maricopa gasoline is more expensive than neighboring communities.

What makes our gasoline more expensive than the rest of the state?

Maricopan Gene Bischke noted the stark difference between Maricopa and Casa Grande fuel prices this week, especially diesel fuel and asked if a monopoly was in play. It’s more complicated than that.

Cleaner Burning Gasoline (CBG) is a specific formula of gasoline required to be sold in Maricopa County year-round and Western Pinal County from May 31 to Sept. 30. CBG meets vapor pressure requirements, which is regulated for air pollution and mandated by U.S. Environmental Protection Agency.

According to the Arizona Department of Agriculture, Weights and Measures Division, Maricopa County, along with cities in Pinal County, are required to use CBG for at least half the year.

Michelle Wilson is the regulatory compliance administrator for the Weights and Measures Division.

“CBG is a boutique fuel where it’s blended up to help improve air quality,” she said. “…It meets a lower vapor pressure, so it doesn’t evaporate as readily.”

Wilson said producing CBG costs more in refineries than conventional gasoline. This can translate to a slightly higher sales price when it reaches consumers.

Some residents in Maricopa may have noticed an uptick in gas prices during summer months, and a decrease in winter months. This is because the county is free to switch back to conventional fuel, though prices are still above average when compared to the rest of the state, even during off months.

Wilson said the CBG program “is unique to this Maricopa air quality region. It consists of a program that mimics some other fuel standards, so in the summer it mimics a federal reformulated standard, and in the winter, it requires fuel that mimics California Phase II Fuel. But this specific program and requirements and regulatory structure is unique to this area and doesn’t exist anywhere else in the country.”

Another cause for uptick is the location of the refinery.

Where does our county’s fuel come from?

Arizona has no oil refineries, meaning gasoline is delivered from refineries in southern California and western Texas pipelines. These refineries produce state-mandated CBG formula. The western pipeline, coming from the Los Angeles area, runs through Yuma and ends in Phoenix. The eastern line runs from El Paso, Texas, to Tucson.

Aldo Vazquez is a spokesperson for AAA Arizona, which keeps record of fuel prices and trends on a nationwide level.

“Typically, Arizona prices are higher than the rest of the country,” Vazquez said. “AAA doesn’t expect prices to drop as low as other places in the country. Other parts of the country are cheaper, which can be contributed to lower transportation costs and taxes. Those are some of the main drivers for higher gas prices in Arizona. Arizona gets most of its gasoline from the pipeline coming through California, where transportation costs and taxes are much higher.”

This results in mirroring gas prices – some areas in Arizona mirror California gas prices, others mirror prices in western Texas. Gasoline distribution in Southern Arizona can be further broken down on Pinal County’s Motor Fuel FAQ.*

Why is Maricopa the only city in western Pinal County to mirror Maricopa County’s gas prices?

According to the Arizona Department of Agriculture, the city of Maricopa falls under “Area C,” a portion of Arizona encompassing Western Pinal County, which falls under environmental regulations implemented by the EPA. However, there is still a pricing difference between Maricopa and other communities in Area C. 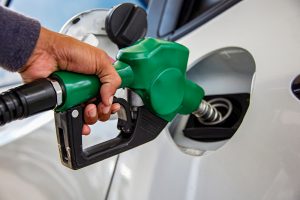 The difference between Maricopa and other communities is the lack of competition between gas stations.

“You have to keep in mind that retailers set their own individual prices, so if the prices are higher, it’s a decision that is being made by that individual station,” Vazquez said.

Employees and management of local gas stations, including QuikTrip, Fry’s Fuel and Circle K have all declined to comment on gas price differences or how COVID-19 has impacted their stores. A Fry’s spokesperson simply stated there are no “supply issues.” At press time, corporate offices of Circle K could not be reached for comment after numerous attempts to contact.

“There are no price gouging laws in the state of Arizona,” Katie Connor, a spokesperson for the Attorney General’s Office said.

According to the Arizona Attorney General’s Office, the Arizona Uniform State Antitrust Act prohibits price fixing and unlawful monopolization. However, there is no price regulation in Arizona. “Therefore, it is not illegal to sell gasoline at high prices, unless the high prices are the result of illegal activity … Arizona does not have laws prohibiting price gouging or charging high prices.”

According to AAA Arizona, as of April 22, the national gas price average is $1.80, more than a dollar cheaper than it was one year ago. The West Coast and New York state have the highest current gas prices, with Arizona falling at a $2.19 average. The nation’s highest gas price goes to Hawaii, which has a $3.34 average.

Arizona has the seventh-highest gas price average. California has the second highest prices, with an average of $2.79. Arizona’s gas prices have seen a 39-cent decrease over the past month.

GasBuddy.com keeps up records of local gas prices in counties as well as smaller communities. These prices are reported by users who claim to be residents of the specific county or area. According to users on GasBuddy.com, as of April 22, prices in Maricopa are as follows:

What about COVID-19 impacting Arizona prices?

According to Vazquez, with the COVID-19 pandemic looming over the country, prices are expected to continue dropping in the state. However, there is no projection as to whether it will plunge dramatically as seen in other states.

“What we’re seeing right now is that demand is obviously low because of the coronavirus pandemic, and crude oil is also cheap right now,” Vazquez said. “While the cuts are historic, it’s not having a direct impact on prices, so giving the ongoing impact COVID-19 pandemic seems to have on crude oil, we’re likely to see gas prices continue to climb down. By how much? That’s still not determined.”

For current information on local gas prices, go to gasbuddy.com to find prices reported by residents, or go to AAA Arizona Gasoline Rates to keep up-to-date on county, state-wide, and national metrics.

To continue to grow our local coverage of COVID-19’s impact on Maricopa in the difficult weeks to come while continuing our day-to-day newsgathering, we are partnering with the Local Media Association’s foundation to ask our readers to help with a tax-deductible donation at GiveButter.com/inmaricopa.