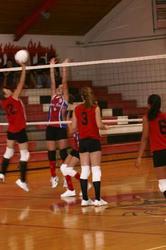 The Maricopa Rams varsity volleyball team fell to 1-6 on the season after a hard fought loss Tuesday at Fountain Hills.

The first set of the match, although lost by the girls 8-25, would prove to be a motivator.

During that match the Rams were awarded a point when the ball appeared to clear the net and go out of bounds on a Falcon return.

However, Rams player Jasmine Melvin stepped up and told the referee that she had touched the ball on the return, and that the team shouldn’t be awarded a point.

“We could have taken the point and said nothing, but that is not what we are about,” said coach Paul Olsen.

That shot of honesty seemed to spark the team out of complacency, and the next two matches went to the wire with the Rams losing both, 21-25 and 22-25.

“It was a hard fought match up and some good volleyball,” Olsen said.

The Maricopa Rams varsity volleyball team will host Safford in what may be the team’s most difficult meeting of the season.

The team from Safford is 6-1 this season and went undefeated all last year before losing in the final four.

“They are a great team, and it is going to be a difficult match up,” said Rams coach Paul Olsen.