With one dissenting vote, the Maricopa Planning & Zoning Commission approved the recommendation of an expansion request for Global Water Resources’ wastewater treatment facility.

Global Water had a previous expansion plan in place in 2006, but that “never panned out,” senior city planner Rodolfo Lopez said. Now the company has a new master plan that would allow the wastewater facility to treat about 60 percent more effluent.

“The retention area is being completed at this time,” said Jason Thuneman, vice president of project management. “We expect construction to be complete at the end of October.”

That is also when that part of the expansion is expected to come online, he said. Global Water has an industrial use permit for its expansion tanks worth $1.8 million. It will have two basins on the south end of its campus and four storm-water retention areas.

“The storm-water retention basins on the west side, those are always dry. In the event it rains, those are where the site will drain to,” Thune said. “The two basins on the south side, after we treat the wastewater and are ready to send it to a community, those are storage ponds – collectively 3 million gallons.”

Along with the development review permit request, Monday’s meeting included a public hearing on Global Water’s request to be rezoned general industrial to meet the new code.

Commissioner Michael Sharpe was not satisfied with the plans for the west border of the property, which neighbors a residential area. The Lakes property on the east side of Global Water is not yet developed, but Global Water completed a 1,200-foot perimeter wall there.

That east side is also to include a landscape buffer that does not exist along the west wall. 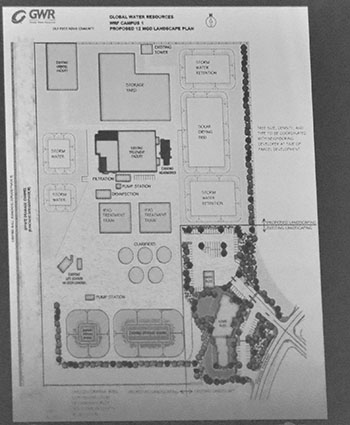 “I’m concerned about the number of residents along that wall,” Sharpe said.

Those residents are in the easternmost neighborhood of Rancho El Dorado, which backs up to the west side of Global Water. Sharpe said they would have to see the wastewater facility with no trees or other landscaping to hide the view.

Running along the Global Water side of the wall is a drainage channel rather than foliage. No landscaping is planned for that part of the property.