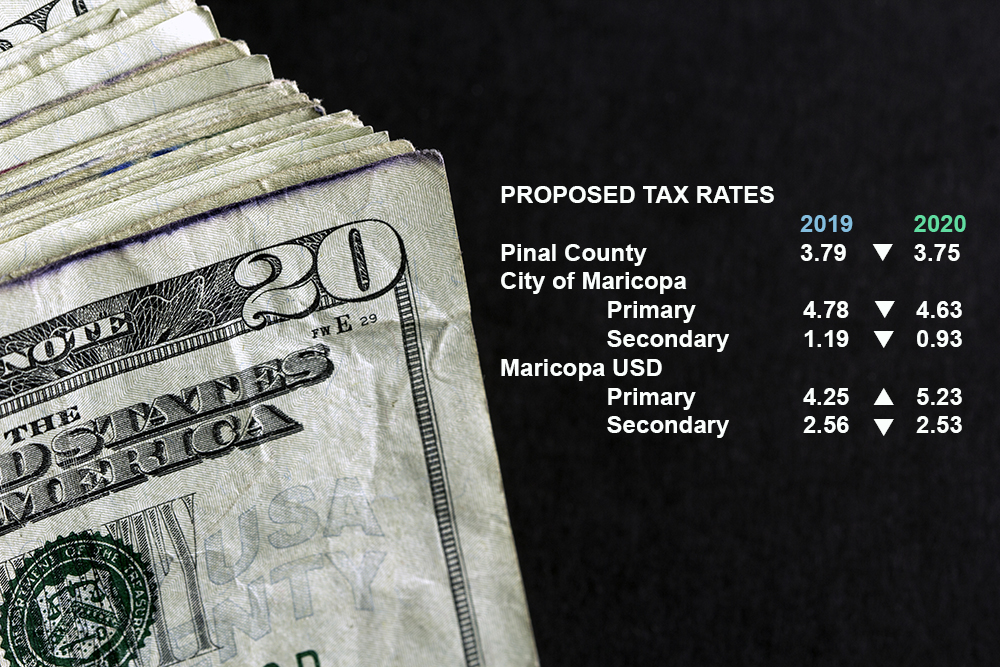 Property taxes are in a generally downward trend, but there is still uncertainty in local budgets. That is causing finance experts to calculate zero revenue growth in building budgets.

The City of Maricopa and Pinal County are dropping their tax rates as the overall tax levy increases. Maricopa Unified School District expects its secondary tax rate to decrease while the primary rate rises.

The county is planning to drop its primary property tax rate from 3.79 to 3.75 when rates are adopted in August. Angie Woods, director of Management & Budget, said it was a huge effort by the county to meet goals of bringing down the tax rate. The budget, she said, was built with an eye on the pandemic.

“Our local excise tax and state shared tax revenues were built in as flat,” Woods told supervisors this month.

She said April revenue numbers were better than projected.

“Very, very positive numbers for the month of April,” she said in a supervisors’ meeting this month. “Very surprising.”

MUSD’s governing board will discuss its proposed budget at its meeting today. The district’s secondary tax rate, which pays for the voter-approved override and bonds, is scheduled to fall from 2.5557 to 2.5327 for fiscal year 2020-21. The primary rate, however, may rise from 4.2475 to 5.2256, as previously reported. Without the addition of an Adjacent Ways levy for the second high school, the primary rate would have decreased about a cent.

“Before the COVID-19, closure I was projecting a growth of 340 ADM,” Finance Director Jacob Harmon said during an earlier meeting. “Since there are so many unknowns due to the changes in the world and our economy, we’ve decided to build the budget based on zero growth so we can be prepared for worst-case scenarios.”

Though the district is receiving funding through the CARES Act, estimated at $1 million, how far it will stretch is a question.

“I have a strong feeling, based on different information we’ve seen in trends in other states, other districts, that the expense of reopening is probably going to outweigh the CARES money,” Harmon told the board.

The governing board meets tonight at 6:30 p.m. and can be viewed live on the district’s YouTube channel.