Maricopa resident Lea Stockhammer has quite a story to tell.

A survivor of the Holocaust, she has seen history — and some of its worst horrors — in person.

At age 5, Stockhammer was sent to a concentration camp in 1941. Thereafter, she lived in war-torn Croatia, and was there the day World War II ended.

Now 87 years old, Stockhammer has many memories she holds dear, and one of them came years after emigrating to Chicago from communist Yugoslavia in 1966.

“There it is,” she said, pointing toward the American flag in her Province backyard.

And much like the guidance Stockhammer can offer through her life’s stories, that full-sized flag, lighted and flying from a pole set in concrete, serves as a guidepost in many ways.

The flag flies above Province Parkway, the community’s main thoroughfare. It’s tall and large enough to serve as a navigation point for people in the neighborhood trying to find their way around.

Citizenship in the United States was an important step in the life of the Stockhammer family, not only for the future it represented but for the transition it offered out of a past full of hardship.

A unique perspective
During World War II, the Axis powers invaded and occupied Yugoslavia and split it up. The Independent State of Croatia was formed and served as a Nazi satellite state, ruled by the Ustaše, a fascist militia group that established and operated its own concentration camps to murder hundreds of thousands of Jews, Serbs and political dissidents. The group established and ran Jasenovak, which soon became one of the largest and most violent concentration camps in Europe.

At the time, Stockhammer’s father, Alexander Kohn, was a successful tailor, specializing in suits. Her mother, Katinka Kohn (formerly Strenger), was a stay-at-home mother.

One of Stockhammer’s earliest memories as a little girl was a sign of things to come.

“People came into our home and made us put on yellow armbands with a Jewish star,” Stockhammer said. “It’s hard to remember exactly, but they told us we could not ever take them off and that we could not be on the streets after five or six o’clock in the afternoon.”

A few months later, she was sent to Kruščica, a concentration camp in Vitez, Bosnia, now part of Croatia.

Kruščica was established and operated by the Ustaše between August and October of 1941.

Prisoners were given a ladle of bean soup each day and eventually had to eat grass and leaves to survive. Stockhammer remembered an incident in the soup line one day.

“I walked a little bit out of the line and the guard pushed me and spilled my soup and my mother gave me her soup,” Stockhammer said. “That was the only food each day, and a piece of very hard bread.”

In October 1941, Kruščica was dissolved. On Oct. 1, 250 Jewish males were sent to Jasenovac. The next week, Stockhammer and 1,200 other Jewish women and children were sent to Loborgrad, a camp established for women and children. Prisoners were subjected to torture, robbery and, for “undisciplined individuals,” murder.

Stockhammer had an aunt married to a Catholic man who knew a priest who got her out of Loborgrad a few months before it was closed in 1942 and prisoners were sent to Auschwitz, where many were murdered.

“My father’s sister, Dragica [who lived in Zagreb] sent a letter to a Catholic priest with the Croatian Church,” Stockhammer recalled. “He was very well known and was helping Jewish children. She told him my father was a good man who helped her and her husband with their business, and they would like to take care of me.”

Stockhammer’s aunt sent the letter without knowing what would come of it.

“One day, I just showed up” on Aunt Dragica’s step, Stockhammer said. “She took care of me and two more children.”

While Stockhammer narrowly avoided likely transfer to Auschwitz, her safety was anything but assured.

“There was danger all around,” she said. “My aunt wouldn’t let us go out and play with children because she was afraid that somebody or the neighbors would tell that she was hiding three children.”

During World War II, Croatia, along with most of Europe, was destroyed by the ravages of war. Economies were devastated and shortages of life’s staples were widespread. It was a struggle just to survive.

Stockhammer never forgot what her aunt did for her during those trying times.

“When I was in the concentration camp, I was always cold, I was always hungry, and I always felt that I was all by myself,” she said. “When I came to live with my aunt, I got care, loving care, and at that time, whatever was possible for us to have, she found it and gave it to us.”

As World War II ended, Stockhammer knew she had lost her mother and older brother, Vladimir, in the concentration camps, but she held out hope her father, Alexander, would one day return.

“It was very difficult,” she remembered. “On the day of liberation, I sat outside of the house, on the edge of the sidewalk and I had a loaf of bread in my lap, and I was waiting on my father to come home. I waited for two days, and my aunt came out and said, ‘Lea come in. If your father is alive, he’s going to find us.’

Finding a new normal
Stockhammer was affected in so many ways by her experience during World War II and her time in the concentration camps. Crucially, it delayed the start of her education by years; she didn’t begin elementary school until she was 10.

“One of the biggest difficulties I had was in school,” she said. “I was absent-minded. I couldn’t concentrate, and I was put in the first grade. I was a lot older than the other kids and the children made fun of me. You can imagine what children do to you, and I had a hard time finishing school.”

Years later, Lea met the love of her life, Dan Stockhammer, a fellow concentration camp survivor. The two dated and married after he graduated college. It’s a day Lea remembers with a smile.

Navigating a new world
When World War II ended, Yugoslavia was once again reunited. In 1953, Joseph Broz Tito came to power and would remain the country’s leader until 1980. While the country’s direction was decidedly communist, some regarded Tito as a benevolent dictator, while others regarded him as something more sinister.

While Stockhammer has no love for the communist government she and her husband left behind nearly 60 years ago, she’s also quick to point out it wasn’t all bad.

“Joseph Broz Tito was good to the Jewish people,” Stockhammer said. “If Jews wanted to go to Israel, he would let us go. The government would pay for whatever we wanted to take with us, except if you owned real estate, you had to leave it with the government.”
It was that understanding that would soon pave the way for the Stockhammers to make their way to America.

But those who refused to join the communist party, including Lea and Dan, a doctor, found their lives affected adversely.

“If you were not a member of the communist party, you could not get what you wanted,” Stockhammer said. “He couldn’t get a residency or a chance to practice his specialty. We couldn’t get an apartment in the bigger city, so we had to live in a smaller town. We weren’t happy.”

It all started to change when Lea, who was part of a folklore dance group that performed for prominent people in Yugoslavia, performed in free countries including France and Italy. Dan had spent time in Switzerland as part of a business trip with a Jewish community.

As Lea explained, they had tasted freedom and wanted more.

“We decided that we wanted more for our children,” she said. “We wanted to give our children a better life than we had.”

With that in mind, Dan started taking English lessons in secret and planned to go for post-graduate studies in America.

It wasn’t easy, however.

“They needed doctors left and right,” Stockhammer said. “He’d quit his job and (Yugoslavian officials) expected what we were going to do. They knew we had a family and they told him they wouldn’t give him a visa to go.

“He told them that we are going for just one year and they told him, ‘OK, you can go but your wife and your daughter (Ruth, who was not even 6 years old), will stay here. We will take good care of them.’ My husband said, ‘No, that is just one chance in a lifetime and if I go, my wife and my child are going with me.’”

The Yugoslavian government apparatchiks were skeptical. But as Lea explained, Dan had one more card to play and it got him and his family out of the country and to America.

“He told them, ‘I’m Jewish and I can go to Israel.’ And at that moment, they gave him the OK,” Stockhammer said.

Lea explained the Yugoslavian officials realized the family could just move to Israel, and then to America. Their trip to the United States was approved.

Living in America
The Stockhammers sold everything they owned in Yugoslavia and went to Chicago. With just enough money for two plane tickets, they had to borrow money for a third fare.

“By the end of my husband’s residency [in Chicago,] I was able to save enough money to pay back the money for that plane ticket,” Stockhammer said.

There were a lot of firsts in the Windy City for the Stockhammer family. Lea marveled over their apartment and unlimited running water.

“My daughter took three bubble baths a day,” she said. “It was also the first time I’d had peanut butter and American cheese.”

But Stockhammer never forgot her roots. She still remembered how to live frugally.

“I remember walking to the store that had milk for 45 cents per gallon and chicken backs and necks, they were 7 cents a pound,” she said. “I always had a decent piece of meat for Ruth, and my husband ate at the hospital. This is how we made it through our first year in America.”

Another first came in 1967, when Lea and Dan welcomed their first offspring born on American soil. Dean was born within a week of the blizzard of 1967, which is on record as the biggest snowfall in the history of Chicago — 23 inches in a two-day period and drifts as deep as 15 feet.

But Lea and Dan were never too far from their pasts. Their experience in the concentration camps affected them even in safe and secure America. 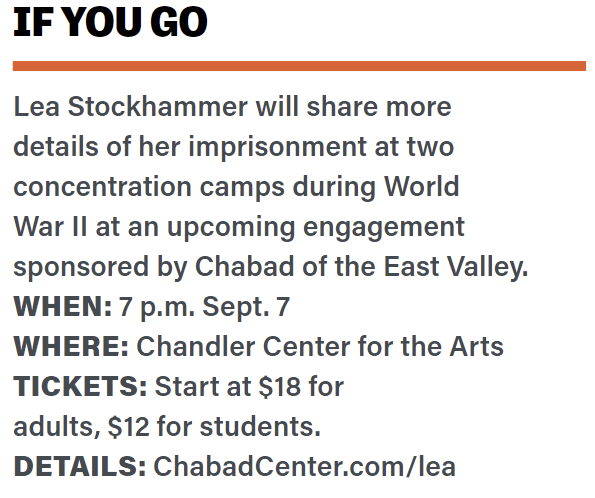 “My husband and I were always scared of uniformed people,” Stockhammer said. “If they were walking on our side of the street, we would go to the other side.”

That trepidation followed them to Chicago.

“We still had that fear in us,” she said.

Stockhammer’s past remains a part of her life today and who she is. But she strives to see the positive in life.

“You never forget,” Stockhammer said. “But you cannot live with hatred for your whole life. I’ve tried to have a normal life as much as I can.”

Read about the author’s insights at “Editor: A once-in-a-lifetime opportunity.”