At 16 years old, Isabella Guilford may be a young business owner, but in the world of collectibles and antiques, she’s a seasoned veteran.

“I’ve been around collectibles all my life,” said Isabella, proprietor of Mercantile Maricopa, who grew up around auction houses. Auctions and estate sales remain a favorite activity for her family.

While Isabella has always held a keen interest in collectibles, her enthusiasm for the profession surfaced at a storage auction.

“I was just 7 years old at the time,” Isabella said. “I remember my parents telling me not to bid on anything. But I got excited and had to buy a storage unit.”

As Isabella recalled, the excitement was short-lived.

“I just remember it was nothing but a bunch of random boxes,” she said. “I was so excited, until I started opening the boxes and found there was really nothing there.”

Shortly thereafter, Isabella’s father, Nathan, saw that spark in his daughter. He encouraged it and has many fond memories of her at storage locker auctions years ago.

“I told her that she was in charge of bidding, and she’d have to decide how high to go,” Nathan said. “And the thing is, she got good at it.

“I loved watching her intimidate grown men at those storage auctions. None of them wanted to bid against her.”

These days, Isabella is just as interested in items, but now, she is thinking about their history and finding them a new home.

One item in her store is a coffee grinder from the late 1800s. It was part of a lot she bought at an estate sale, and when she was sifting through the goods, she was taken aback.

“I didn’t even know that I had that item,” Isabella said. “I did a little research and found it was from the 1800s. It’s so interesting that people had to go through all that work to grind their coffee. Now, people just use a compact electrical version of the same machine.” 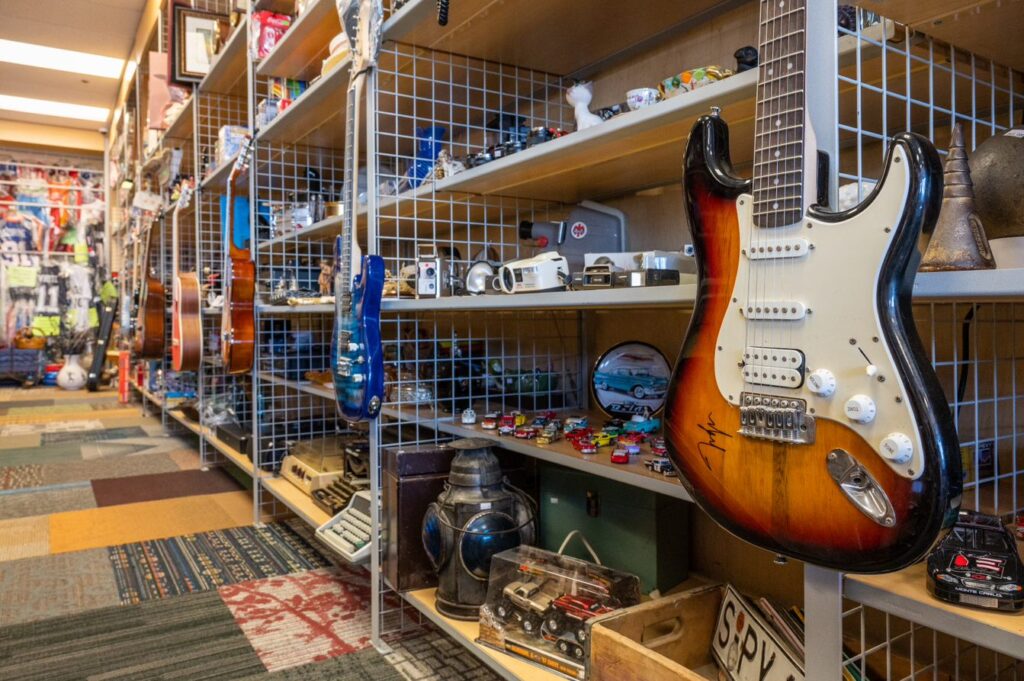 The coffee grinder tells a story that’s more than a century old. But that’s not to say everything is old and dusty at Mercantile Maricopa, which opened in April. (The store’s name evokes local history, too. Maricopa Mercantile was a fixture in town for decades — its building dated to the 1930s — before it was torn down in 2014 to allow the widening of Honeycutt Road.)

Many items in Isabella’s shop related to pop culture from decades past will recall childhood years, including sports memorabilia. As you walk in, you’ll notice boxes of sports trading cards from the ’80s, signed baseballs and jerseys, along with a Nintendo NES game console with cartridges.

There’s a diversity at Mercantile Maricopa you don’t see elsewhere.
Isabella is aware of her market.

“Maricopa is a young city,” she said. “It’s still fairly new and it’s not as developed as Phoenix.”

It’s the focus on classic collectibles, along with pop culture items, that Isabella feels will relate well with Maricopa’s young population.

“It gives us a larger reach of people in Maricopa,” Isabella said. “For people my age and the younger generations, we wanted merchandise that would catch their eye.”

An opportunity arose when Isabella bought out a sports collectible store in Phoenix.

“We felt that this would fit perfectly with our theme and more than that, it would prove to be a good draw to get people to come in and learn about history through our items,” Isabella said.

The thrill of the chase
It’s safe to say every sale at Mercantile Maricopa began with a successful hunt.
In some cases, it’s a treasure hunt.

“You never know when you’re going to pick up a knickknack for $3 and look it up on Google and find out you have a $700 item on your hands,” Isabella said.

But for Isabella, the real treasures are the relationships forged.

“I love being out in public and interacting with people,” she said. “That’s a big reason why I got into this business.”

Isabella regards her day-to-day dealings with people as a crucial lifeline for her business.

“I love networking,” she said. “I love working with people. I get most of my business from word of mouth. When I come into someone’s estate and they have a lot of antiques and collectibles, or they bring it to the shop and we give them a good deal, they tell their friends, and it leads to more business.”

Sometimes Isabella can offer deals that some bigger businesses can’t.

“Since I own the company and we’re local, I can give people a good deal,” Isabella said. “If someone comes in and spends a couple hundred dollars, I’m going to give them a good deal.”

If an item is marked $65 and a customer offers $50, she just might take it, Isabella said.

Isabella pointed out that some items have no wiggle room, mainly sports collectibles that have been graded and come with Certificates of Authenticity (COAs). That’s due mainly to the fact that those items must be sent off to be professionally graded, which costs money on top of whatever she had to pay for the item to begin with.

And sometimes, the deal doesn’t work out.

Isabella explained she would have had to resell it for $7,000 or $8,000 to make a profit and it wasn’t going to bring that much.

And like anyone who has ever gone fishing, Isabella has a story about the one that got away.

“There was an older gentleman who used to live here but was moving away and he had these beautiful stainless-steel horses that were filled with concrete,” Isabella said. “They were beautiful. But someone came in the middle of the night and dragged them right out of his yard. I’m guessing they were worth $10,000.”

Beginnings of a future
Isabella grew up in a family where auctions and estate sales were the norm. Her father, Nathan, owns Liquidate AZ, a company that specializes in closeouts and auctions. Before moving to Arizona, he learned the auction trade in Texas and also ran auction houses in that state and Florida.

As a youngster, Isabella worked as a “ringer” or a “ring-man” for his business.

“I’d help bring the items out for auction and would also help collect bids,” she said.
Nathan marveled at his daughter’s presence at those auctions.

“She fit right in,” he said. “She was telling people where to sit, how to bid and could tell people about items for sale.”

To Nathan, opening Mercantile Maricopa is just a natural progression for Isabella.

Isabella is thankful for her father’s help.

“He really showed me a lot about the business,” she said. “I wouldn’t be where I’m at without him.”

In the next two years, part of Isabella’s first order of business will be to complete her high school education. As a sophomore this year, she attended A+ Charter, but has plans to enroll in ASU Digital Prep, an online school that allows students to take on accelerated coursework.

Her future — and the opening of Mercantile Maricopa — has been on her mind for some time.

“We’ve been thinking about it since December,” Isabella said. “We had the idea and then Vanessa McDill’s (insurance office in the Shops of Maricopa Fiesta) opened up. It’s the spot I’d wanted all along.”

It was the perfect example of hurry up and wait — and then hurry up.

“We had our challenges at first,” Isabella said. “At first there were difficulties in contacting the right people and getting things sorted out and then, all of a sudden, everything fell into the right spot and on top of that, rent was lowered for the first couple of months.

“There are always challenges to overcome, but what I find is that those challenges are often followed by miracles.”

The store is located at 20800 N John Wayne Pkwy Ste 110 Maricopa, Arizona 85139. Make sure to tell them you saw the story at InMaricopa.com or the magazine!

This content was first published in the June edition of InMaricopa magazine.