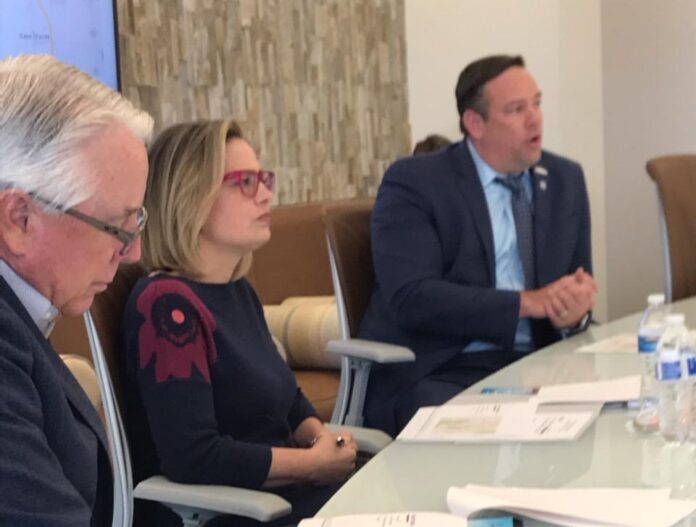 U.S. Senator Kyrsten Sinema made a stop in Maricopa to discuss transportation issues affecting the city and surrounding areas.

While all four projects are important to the City’s future, Maricopa Mayor Christian Price was adamant during the presentation that addressing State Route 347 is the top priority.

“This was a chance for us to reiterate to one of our Senators the importance of getting federal funding to address and improve the 347,” Price said.

Sinema acknowledged the importance of expanding the highway. She also took the opportunity to impress on the group her commitment to ensuring that Arizona gets its fair share of funding from the recently passed federal infrastructure law.

· The State just completed a scoping study that proposes to widen the existing roadways to six lanes, three in each direction.

· Proposes to reconstruct interchange at I-10 to become a diverging diamond.

· Provides connection to I-10 with a new interchange at Val Vista.

· Provides a new access point to State Route 238 which is one of Maricopa’s major roads.

· Would provide alternate route to Mountain West and connection to existing I-11 in Nevada.

· Could serve as bypass to Phoenix for trucks, thereby reducing congestion, emissions, and accidents for local traffic.

· Further studies and evaluations must take place before construction could be considered.