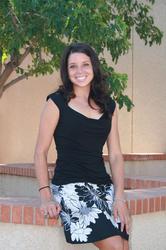 Bruce Wayne had Batman. Peter Parker had Spiderman. Dr. Jekyll had Mr. Hyde. Now, Mallory Parsons, professor of mathematics at Central Arizona College has Coach Mal, or, perhaps, it’s the other way around.

After five seasons as CAC’s assistant women’s basketball coach and three years as an adjunct math professor, Parsons now adds the distinction of full-time professor as her alter ego.

This should come as no shock to anyone who knows Parsons who can’t help but gush about her experiences as a former national championship-winning student-athlete and current staff and faculty member at CAC.

“I love this place,” the Marana native declares. “I came here out of high school, played for two years, and then I started coaching right away. So I really haven’t left the last seven years I’ve been at CAC.”

It is these experiences that keep Parsons at Central Arizona College. As she puts it, “I just think it’s such a unique place; it’s so special. It helped me to grow so much. I would like to give back.”

Parson’s continual commitment to CAC is not for lack of other opportunities. After all, she did turn down a promising career in the business world to enter the classroom.

“Working in front of a computer just didn’t do it for me,” she says. “I enjoy working with the students and giving them a different attitude, outlook and perspective on math.”

While Parsons is a math professor by day and a basketball coach by night (or late afternoon), the two worlds sometimes collide, which is fine by her.

“I like to incorporate real world type of stuff in the classroom, so I always bring in fitness or [Phoenix] Suns’ games or basketball or sports,” she says. “Sometimes, when I ask if there are any questions at the end of class, thinking they will be math questions, the students raise their hands and ask me ‘what’s the best exercise to do here’ or fitness-type stuff.”

It is this type of interaction with students on a daily basis that fosters Parsons’ desire to expose otherwise begrudgingly hesitant students to the world of math.

“I don’t expect everybody to say ‘I love math’ by the end of the semester, but when I see my students grow throughout the semester and all of a sudden they say, ‘You know, math isn’t so bad, I could actually see where I’d use it in the real world,’ that’s absolutely the best part of it.”

If she were given the option of exclusively becoming either a coach or a professor, Parsons doesn’t know that she could make a choice. Thankfully for her, at CAC, she doesn’t have to. In addition, she believes that she is afforded the opportunity to commit herself equally to each calling.

Ironically, the three aforementioned fictional characters all struggled to balance and separate their two very distinct lives and personalities. For our heroine, however, there is no struggle because at CAC, she can be Mallory Parsons, equal parts assistant women’s basketball coach and professor of mathematics.