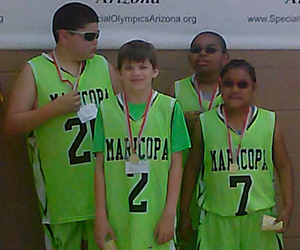 Maricopa Unified School District had athletes participating in variety of events including; the 4×100 meter relay, the standing long jump and the softball throw.

Special Olympics coach Pam Herrera said, “We are looking forward to the Arizona State Track and Field Meet May 7, 8 and 9 in Glendale.”

The team also enjoyed a bowling tournament and luncheon April 12 sponsored by the Ak-Chin Police Department.  “It was very nice and the athletes had a wonderful time earning a medal and a very nice meal,” coach Herrera said.