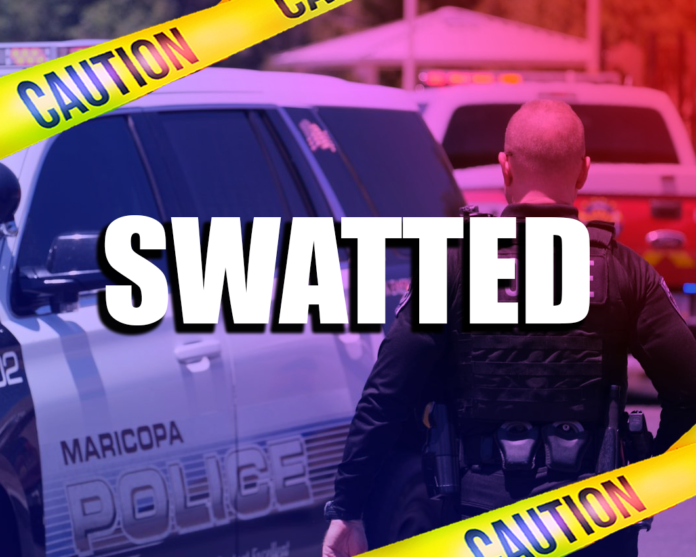 Police are searching for the person or persons responsible for “swatting” a Maricopa family on Wednesday night.

Luckily, no injuries were reported.

“Hey, Maricopa good morning have you guys ever been woken up at 12 at night with the SWAT team in front of your house?” he wrote. “Well, that happened to us last night and it’s called swatting. My wife’s been crying all night and my daughter is embarrassed she will not leave the house and she said she will not go to school. I’m in a dazed confused mode and not sure what I should do.”

Swatting is a criminal harassment tactic of deceiving an emergency service into sending a police or emergency service response team to another person’s address by the false reporting of a serious law enforcement emergency, such as a bomb threat, murder, hostage situation or a false report of a mental health emergency.

Officers were dispatched to the 45800 block of W. Amsterdam Road in Maricopa Meadows about 10:50 p.m. Wednesday in response to a call about a man pointing a gun at his wife, according to Sgt. Hal Koozer, police spokesman. The reporting party said his father was pointing a gun at his mother, gunshots were heard, and the call disconnected.

Police then called the home and received an automated reply stating, “text mail subscriber is not available,” Koozer said.

As police units responded to the residence, the reporting party called back and said his father was in the kitchen, Koozer said, adding police heard more screaming, more gunshots, and somebody say, ‘Please hurry.’”

Officers set up a perimeter around the home, gathered more intelligence and formulated a plan, Koozer explained. Officers on scene were able to identify the residents, make contact via telephone, and have them come out one at a time.

After the home was evacuated, officers determined the report was false and the family was a victim of swatting.

“This case is under investigation as we need to find out the source of this call,” he said. “If (the perpetrators are) located, charges will be filed, and an arrest will be made. We take these types of calls extremely seriously, as these prank calls are dangerous for everyone involved.”

Though Wednesday’s swatting incident was apparently the first reported in Maricopa, Koozer had a recommendation for anybody who might find themselves in that situation: comply with the officers on scene until they can determine that a false report was involved.

Koozer said the Phoenix Police Department apparently had a similar call recently. He did not have details of that incident.