A 12-year-old Maricopa girl is heading for Cleveland next week to compete during MLB All-Star Week.

In the MLB Pitch, Hit & Run competition, Danica Gutierrez beat out the 11-12-year-old crowd in the softball division at Chase Field. Her results qualified her for the national tournament during All-Star week.

“It was awesome,” said Danica, who plays club softball for the Gila Riva Chaos and some club baseball and also plays for the Maricopa Wells Middle School softball team.

This was the third year she has competed in Pitch, Hit & Run. She is typically a pitcher but said her best event was batting.

“I practice at home, I practice on the field,” she said. “I’m hitting off a tee, and I’m working on my agility.”

To reach Nationals, Danica had to work through layers of competition. That started at the local tournament at Copper Sky. She was among the top three in her age group to advance to the Sectionals at Casa Grande. There, she qualified to play at the MLB Team Championship hosted by the Arizona Diamondbacks at Chase Field.

Competition came from around Arizona and New Mexico. Danica finished on top of her age division.

Other Maricopans competing at the MLB Team Championship at Chase Field were Kiersten Cope, who finished second in the 7-8 softball division, and Madison Brandon, third in the 13-14 softball division.

Winning the MLB Team Championship did not automatically qualify her for Nationals. MLB has 29 Team Championships and selects the top three scores across the country as National Finalists. Danica was No. 2 in her division and she will be joining players from Alabama and Washington in the finals.

Danica has played softball since she was 8. She previously played soccer, which was when her father noted her killer instinct.

“I saw how aggressive she was, in a good way,” Daniel Gutierrez said. “She was one of our top scorers. And when she was a goalie, she was always moving.”

She has also played flag football, volleyball and basketball.

Daniel and Monica Gutierrez moved to Alterra form Texas more than 13 years ago. Both of their children, Danica and Daniel Jr., were born here.

Danica’s father has always been her coach or at least an assistant coach. He said athletics is great for kids, and not just physically. 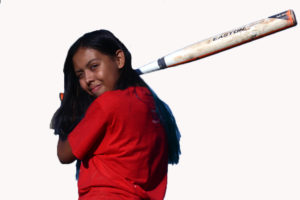 “It keeps them active,” Gutierrez said. “They make friends, they play with anybody. It keeps them from being shy.”

In the pitching portion of the competition, they throw six balls at a strike-zone target. Hitting the zone is worth 75 points. In hitting, participants hit six balls for distance off a batting tee, with the top three measured distances counting toward the score. In running, participants are timed from second base to home plate.

The National Finalists were announced on television. The competition is July 8.