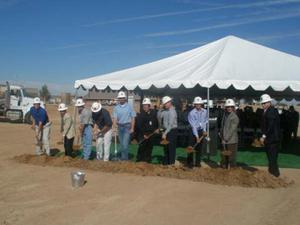 For the third time in three weeks dirt was thrown for the ceremonial groundbreaking of a school in Maricopa. On Tuesday Maricopa High School (MHS), where renovations have already begun, was the site of the ceremony.

Plans for the second phase of the high school’s reconstruction include a two-story, 44-classroom building on the north end of campus, a lecture hall, classroom wing, gymnasium and the remodeling of the kitchen and cafeteria. Also in the plans is the new football stadium, as well as junior varsity baseball and softball fields.

Mark Snider of McCarthy Construction said the company hopes to have the two-story building and most of the other classrooms finished by August when the 2008-09 school year begins.

Superintendent Dr. John Flores assured the crowd, “You will be proud of this school.”

Director of Business Services and former Principal of MHS Burnie Hibbard said the new classrooms, chemistry labs and computer labs will provide the students the same opportunities as any other school in Arizona. When all construction is completed, Hibbard said the school will encompass 300,000 square feet and will be able to accommodate 2,000 students.

Principal Jeff Kleck said he is “excited and jazzed” about the school and is looking forward to all the great things that are going to happen.

After a quick song from the marching band, representatives from the school district, city and construction company donned hard hats and threw dirt into a special bucket for Kleck to keep at his desk.