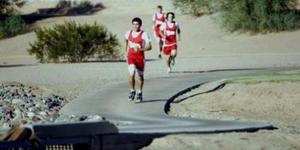 With sectional competition scheduled for the final Saturday in October and the state meet taking place a week later, Maricopa High School cross country runners are getting into top condition for the season’s biggest races.

“We’re still training pretty hard,” said Ronnie Buchanan, head coach of the Maricopa girls cross country team and an assistant coach for the boys squad. “We haven’t backed down. In about 10 days or so, we’ll start backing off on the training. Hopefully, they’ll feel good and be ready to roll when it’s time to roll, and that will be at state.”

The Maricopa boys are aiming for a return trip to the state meet after placing eighth in Class 4A-II last season. The Rams have been assigned to Division III in this season’s statewide realignment for cross country. They will run in a 15-team sectional at Marana High School on Oct. 30, with the goal of finishing among the top eight in order to qualify for the state meet on Nov. 6 at Cave Creek Golf Course.

“If everybody has a good day, we can run with anybody,” said Duane Anderson, head coach of the MHS boys cross country team.

Anderson is confident that the Rams will advance from the Marana sectional to state competition in Cave Creek. The ultimate goal remains the same as it has been all season – a statewide finish among the top half-dozen teams in Division III.

“We have some of the best teams in the state in our division, but we’d like to get up into that top six if we can,” Anderson said.

Senior captain Travis Moore took medalist honors for the Rams in a five-team meet Wednesday at Poston Butte High School in San Tan Valley. Moore finished in 18:02 to win his first race of the season.

“He did very well,” Anderson said. “I think the course is a little long, and it was real soft.”

The Poston Butte cross country course begins at the football stadium and circles around an adjacent farm field before winding back to the 20-yard line on the gridiron.

The Rams finished third as a team, defeating Apache Junction and Poston Butte while placing behind first-place Notre Dame and runner-up Florence.

Maricopa competed without three of its top runners, including junior Chris Lessard, who has been leading the Rams all season.

“Chris has a foot injury, so we kept him out,” Anderson said about Lessard, who placed 12th at last year’s 4A-II state meet and has won several races this season. “We’re hoping that he will get better by taking a week or so off.  It is preventive. He wanted to run, but we thought it would be best to take another few days.”

“The girls are making progress,” Buchanan said. “They’re doing well. They are understanding the components of how to race, the race strategy. I think that is something that is a learning experience at every meet – knowing when to make moves, when not to make moves, keeping your focus.”