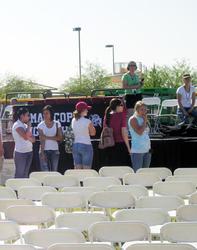 “We need to practice everything so the event goes on with no errors,” said senior advisor Larissa Rzemienski.

The graduation will be at Ak-Chin Milton “Paul” Antone Memorial Park this year to avoid complications related to ongoing renovations at the high school.

“By having the graduation at Ak-Chin we are able to keep the ceremony near the city,” said Christie Mitchell senior class sponsor.

However, the members of the senior class were the ones who ultimately made the decision on where they’d toss their caps in celebration.

“They were given a ballot with the choice of having the graduation at Ak-Chin or Pacana Park,” Mitchell said. “Once the ballots were in, almost 70 percent of the seniors chose the Ak-Chin location.”

This year, 160 seniors will graduate out of a class of 167 according Rzemienski.

“Those few who are not going to graduate were pretty aware of their status at the beginning of the year,” Rzemienski said.

Below are listed several of the school’s top scholarship winners of the graduating class.

Kevin Ngai received the Walton Family Foundation Scholarship for $10,000. Ngai was the only Arizona recipient. Ngai also received a $36k scholarship from Arizona State University and a $20k tuition waiver from the Arizona Board of Regents.