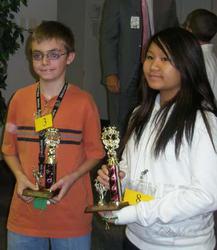 If Karianne Saysana didn’t like them before, she just might have a whole new appreciation for chicken gizzards, or any other kind of gizzard, following her win Thursday in the local qualifier for the Pinal County Spelling Bee.

Also making it to the county spelling bee was Cory Riecken, the other Wells student in the competition, who placed second in the bee.

Two students from each of Maricopa’s four elementary schools and Wells gathered at Maricopa High School to participate in the district spelling bee after either winning or coming in second at their school competitions. The 10 students were each asked a practice question followed by the first round of the competition.

During the first round four students were eliminated followed by three more in the second round. Konner Kirwan from Maricopa Elementary School was the last student to be eliminated before the championship round. After Saysana and Riecken spelled their first words correctly Riecken misspelled “gypsum.” Saysana spelled her word correctly and then was given the championship word which she spelled correctly to win the bee.

After the competition, MUSD Superintendent John Flores congratulated all the students on a job well done at their own school competitions and at the district competition on Thursday.

“Don’t feel like you failed, you gave your best effort,” Flores said to those who didn’t qualify for the next level.

Flores went on to say the students involved in the competition will be the leaders of the world one day and he was proud of their accomplishments.