A Maricopa man is fighting for his life.

Victor Jones, 54, and his wife Robin have had a stressful few months, to say the least. At the end of September, a routine hospital visit to check Victor’s levels on a blood pressure medication uncovered inevitable heart failure.

“Victor has a history of high blood pressure and that started in 2015,” Robin said. “He also has the hereditary factor, because his father also had a heart transplant, at the age of 48.”

Robin recalled their experience going to Banner University Medical Center in Phoenix to speak with Victor’s doctor about his medication no longer being efficient enough for him. After doctors took a few tests, Victor was placed under observation. They found his blood pressure was dropping drastically.

With a long waiting list for hearts, doctors needed to install a TAH (total artificial heart). This temporary heart is used as a replacement and can last four years, depending on the circumstances. TAH takes over the work the failed heart could not perform, keeping Jones alive and functioning until a permanent heart becomes available for full transplantation.

The artificial heart was placed Oct. 5, with Victor being put into a medical coma due to the nature of the surgery and for the healing of a collapsed lung.

Robin Jones expressed her exhaustion with the long days and nights at the hospital on top of juggling personal responsibilities like driving her grandsons to and from school and getting enough sleep. She is also working for MUSD in the health office of Saddleback Elementary.

“I’m traveling constantly,” Robin said. “I’m here almost 24/7, so I am just functioning from day to day. It’s been a roller coaster.”

Even with the stress and worry, a weight was lifted when Victor woke up from his coma about a month later.

“He’s been doing well, he’s progressing,” Robin Jones said. “He’s in high spirits. He was a little confused because he had been asleep so long.”

Robin said she was happy with Victor’s strength and resilience during the process.

“Victor was a veteran. He served in the Army and was also a merchant marine for 15 years,” she said.

In November, Victor Jones sat up on his own and took a few steps for the first time in over a month with help from hospital staff.

Victor and Robin Jones have received unwavering support from friends and family, including special support from their teenage grandsons Darian and Jaylin Abercrombie, who live with them. The boys created an e-sports company called Team Radius and plan on selling custom merchandise to their fans, donating the proceeds toward their grandfather’s medical bills. Victor Jones loves playing videogames with his grandsons, and they often game together in their free time.

Local radio host and vlogger Marc Montgomery had Jaylin, 15, on his radio show to speak about his grandparents and how people can help. 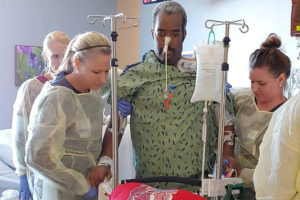 “We’re just selling stuff, like stickers and stuff,” Jaylin said. “You can just buy that, and it’ll help us a lot, to pay off some of the bills we have.”

Montgomery has been a close friend of Victor and the Jones family for several years and wanted to help as well. This came in the form of a GoFundMe.com page for people to donate to “Grandpa Jones” medical expenses and the heart transplant.

Despite all the hardships and sleepless nights that have come with Jones’s heart failure, the Jones family and friends remain optimistic and hopeful.

“We’ve got the boys and Marc,” Robin Jones said with a laugh. “And Victor’s doing great right now.”

Before any aesthetic procedure know the risks, provider