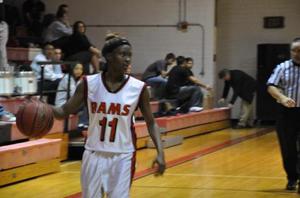 It was a tale of two halves at Fountain Hills High School Tuesday night.

The Lady Rams allowed the Falcons to control the tempo early and struggled to score in a slow- paced, half court game. The score was tied 8-8 at the end of the first quarter, and the Rams took a slim 20-18 lead into halftime.

The Rams outscored the Falcons 22-8 in the third quarter, and the rout continued through the fourth quarter as the Lady Rams ran away from the Falcons and posted an impressive 61-37 road win.

The MHS girls face what may well be their toughest challenge of the season this Friday as they make the long road trip to face a Safford team looking to avenge their Jan. 6 loss at Maricopa.