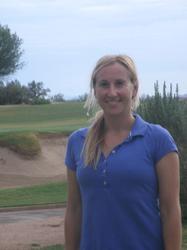 After competing during the fall season for the first time last year, the Maricopa High School golf teams have a better idea of what to expect in 2010.

Prior to last season, the MHS golf program played during the spring as a co-ed team. In moving up from Class 3A to Class 4A-II at the start of the 2009-10 school year, the program not only switched to playing golf in the fall, it also began fielding separate teams for boys and girls. Mike Russoniello, who had been coaching the co-ed team, took over leadership of the boys’ squad, while Ali Poulos was hired to coach the girls.

“Coach Russoniello has done an amazing job with fundraising and support,” Poulos said. “So we’re very lucky to have the boys’ team kind of leading the way, paving the way for the girls’ team. Mike coached them back when they were co-ed, and he really started building that up.”

Russoniello, who is now in his sixth year with the Maricopa golf program, said the boys’ team gained valuable experience last season in playing against formidable opponents on difficult courses.

“We had a lot of good tournaments during the season,” the coach said.

“They’ll know what to expect from the teams they faced last year,” Russoniello said. “And they’ve played the courses now. They know what the courses look like, so they have course experience; we can talk hole-by-hole, and they’ll remember how they did. We’ll review their scorecards from last year and look at how they did and compare it to what they would expect to do this year. Being able to see what those courses were like and take that in for this year, we’ll have a definite advantage, and we’ll put up some better team numbers.”

Russoniello has been encouraged, in particular, by the potential Kwon has exhibited in preseason practice. “He is just hitting the ball fantastic,” Russoniello said.

The Maricopa boys’ team will open the season Aug. 31 with a home match against Gilbert Higley and Gilbert Mesquite at Southern Dunes Golf Club.

Russoniello said that playing at a home course as challenging as Southern Dunes will help the Rams when they travel to other venues.

“Southern Dunes is within the top 10 in the state of Arizona in toughness,” Russoniello said. “If they can play here, they can play anywhere.”

Russoniello said the Rams appreciate the hospitality they have been shown by the Southern Dunes management and employees.

“The people at Southern Dunes have really been great mentors for our young athletes,” the Maricopa coach said. “They have people that will come out and help us. They’re gracious enough to let us use their facility for tournaments at no cost and to use their range at no cost. What a benefit – it is so nice to have them here.”

The Maricopa girls’ golf team is similarly grateful for the opportunity to play its home matches at another prominent local course, The Duke at Rancho El Dorado.

“The Duke has been amazing to us,” said Poulos, the second-year coach of the MHS girls’ golf team. “We’re very lucky to have two amazing courses in town and two great staffs that let us come out here. So it’s really a strong foundation for our program to be built on.”

Poulos is looking for more girls to join the team, which began preseason practice with a roster of three players – Alyssa Skinner, Brianna Ochoa and Racheal Harmon. The coach said that additional girls in grades 9-12 are encouraged to play, “regardless of skill level, regardless of experience.”

Poulos said golf clubs are available for players to borrow and use throughout the season at no cost. Other golfing expenses are taken care of also.

“The Duke provides us with range balls, water, anything we need at practice,” Poulos said. “And then the school – plus any money that we’ve raised through fundraising – provides all the rest of the equipment. The girls really just need to come with a good attitude, ready to play.”

Poulos has been encouraged by the work ethic the team has shown.

“Even though we’re a small team, the girls have really positive attitudes,” Poulos said. “They’re here to work hard and learn the game. I look forward to a good season, building upon what we already have established when it was a co-ed team, like the boys have done. We’re looking forward to building a foundation.”

The Maricopa girls’ golf team will begin the season Aug. 30 with an away match against Chandler Seton Catholic and Scottsdale Notre Dame at San Marcos Resort in Chandler. The first home match is scheduled for Sept. 8 at The Duke against Apache Junction.

“Right now, as beginners, we’re not only focusing on the game of golf, but also the etiquette and the respect that comes along with the sport,” Poulos said. “So it’s learning the game of golf, and then also learning what it’s like to be athletes at Maricopa High School and respecting the game.”