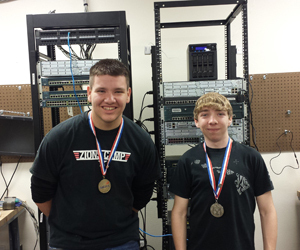 The students received prize packages valued in excess of $1,000 each, the release states.

The students have been a part of the Cisco Academy program at MHS since its inception three years ago.

“During their time in the program they have had the opportunity to rebuild computer systems, administer servers, create and administer the classroom domain as well as configure routers and switches,” the press release states.

The release also stated the students worked on weekends and during the summer “to gain the experience necessary to be successful.”

Cisco Certified Network Associate (CCNA) Routing and Switching is an entry-level network engineers’ certification program, according to the Cisco.com website.

Nathan also won a Lenovo laptop valued at $900. He will be competing at the Skills USA national competition in Kansas City, Mo., in June.