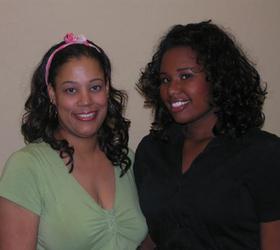 Tamera Porter-Roach has a vision to improve conditions at Maricopa High School by starting a PTO, one says she plans on seeing to fruition.

Porter-Roach is a two-year resident of Rancho Eldorado and a proud mother of two.

She said her 15-year-old daughter, Chelsea Mapanda, was her inspiration.

“There were students being busted with drugs, staff getting assaulted and just poor performance,” Porter-Roach said. “I couldn’t put up with it any more.”

As she became aware of such problems, Porter-Roach said she considered pulling her daughter from the school.

Her daughter, however, would not have it. She was not to about to allow her mother to give up on allowing her to attend the MHS.

“This school has the potential to be great,” Mapanda said. “It just needs better communication between the parents and teachers.”

The teen’s determination made an impression on her mother.

“I can’t believe her dedication to the school district,” Porter-Roach said. “If it wasn’t for her, I wouldn’t be doing any of this.”

Porter-Roach said she hopes organizing a parent teacher group can solve some of the school’s problems.

The No. 1 problem she hopes the parent organization will address is the lack of communication between teachers and parents.

“When parents have an issue with the school it is often harder to get it heard, but by establishing this committee we can gather the issues that parents have and present them to the educator,” Porter-Roach said.

Porter-Roach is not alone in her vision.

“We need to improve communication between parents and the teachers,” Assistant Principal Valerie Whitchurch said. “We currently have no methods of getting messages out to parents about what is going on in the school. This will give us that conduit.

Others within the Maricopa Unified School District agree.

“It’s critical to have communication between parents and teachers,” said Tom Beckett, spokesperson for the MUSD. “There are a lot of issues that parents see in the school that sometimes go unseen by the educators. It is crucial to have that extra set of eyes.”

Another issue is to just get parents more involved.

Whitchurch said the school’s main problem is bullying and fighting.

“A lot of kids, when they just move here, find it difficult to find their niche which leads to this bullying,” she said. “If we had a parent organization to organize activities for the kids it would help acclimate them into the community faster, and cut down on the bullying.”

Finally, it is hoped that the PTO will help the school deal with its growing pains.

“It went from a student population of 400 to 1,500 in just about a year’s time,” Porter-Roach said. “It’s hard to deal with that amount of growth when you are not equipped for it.”

Parents can volunteer their time, help their kids with schoolwork or fund raise for the school to help offset the effects of such expansive growth.

“Teachers and staff are limited and don’t always have the time to do these things,” Whitchurch said.

The newly formed PTO will meet at 6 p.m. the second Tuesday of every month in the Maricopa High School cafeteria, 45012 W. Honeycutt Ave.

“I encourage all parents to come out and take a part in their children’s education,” Porter-Roach said.