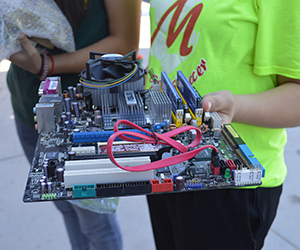 Students from Maricopa High School volunteered their Saturday morning to gather old, unused or broken electronics donated from the community.

Dozens of Maricopa residents brought electronics ranging from computers to compact-disc players. The donated items were separated into categories, and compiled into large boxes. Certain items (such as computer monitors) that were still in working order were put aside for the school to refurbish and use in classrooms.

“With the equipment that we’re taking back to our class, we’re going to use it for next year’s tech classes,” Maricopa High School junior Callaghan Hemmerly said. “We’re taking as much as we can get. We’re hoping to get a lot of people involved because this is a great service.”

Maricopa High School teacher and coach Brad Chamberlain used the recycling service as an opportunity to educate his students as well. Since some electronics were broken or unrecognizably outdated, Chamberlain would have his students identify the different components and wiring involved. The students then strip the components of any reusable parts before putting each item in its designated box.

“These items are difficult to recycle since you have to dispose of them in a special way,” Chamberlain said. “[Arizona Students Recycling Used Technology] will do that for us, so we’re just trying to give the community an opportunity to get rid of some of these items.”

Chamberlain and the high school partnered with Arizona StRUT to provide the Electronic Recycling Day service to the community. Arizona StRUT provides this service around the state as well. Any old electronics the school can’t use will be recycled and refurbished before being distributed to schools and non-profit organizations.

***ADVERTISEMENT***“This is a first time thing (for MHS),” Chamberlain said. “This event is going on all over the Valley though. Schools in Mesa, Tempe and Phoenix are doing the same thing. We’re just hoping to get whatever we can for the classroom so we can turn around and refurbish the computers and components.”

The event ended at noon on Saturday. However, any Maricopa resident wishing to recycle their electronics can contact the school for donation or Arizona StRUT at www.arizonastudentsrecyclingusedtechnology.wildapricot.org.