Both on the basketball court or in the classroom, Anthony Ike “Tony” Fuller has had one goal: help young people reach their potential.

The former basketball coach at Maricopa High School from 2016-19 has had a positive impact on many students and players at the high school and college levels. A teacher at the school, he currently works to help students who have failed classes to recover those credits.

“You’ve got so many young men who are just lost — the lack of discipline, lack of self-love and lack of soft skills you need in life to be productive,” Fuller said. “You try to impart those life lessons. Every once in a while, I get a letter or card or phone call with someone saying thanks.”

Fuller appreciates the gratitude and is quick to recognize those people who have helped him throughout his own coaching career, which got underway after being taken in the 1980 NBA draft by his hometown Detroit Pistons — he averaged four points in 15 games in his only season — and two seasons in Anchorage, Alaska, in the Continental Basketball Association.

He had started his college career at Vincennes Junior College in Indiana, playing for acclaimed coach Alan Bradfield, who earned three national titles as part of a dozen trips to the National Junior College Athletic Association championship tournament.

But location as well as the “opportunity to play and broaden my horizons” led to him to transfer to Pepperdine University, whose campus overlooking the Pacific Ocean in Malibu, California, has been called “a place that looks more like a beach resort than a private university” by Expedia.com.

His decision to head west, after all, led to his long association with Coach Jim Harrick, who would helm the storied UCLA basketball program for eight seasons, joining the legendary John Wooden as the only coaches to win national championships in Westwood.

As a junior, Fuller was coached by Gary Colson — 563 victories in 34 years as a head coach — who would move onto the University of New Mexico.

In came Harrick, for whom the 6-foot-4 Fuller averaged 19.5 points and 6.8 rebounds a game during an outstanding senior season at shooting guard. Fuller was later inducted into the Pepperdine Hall of Fame.

After his short professional playing career, he began his coaching tenure with Harrick — including six years as an assistant at Pepperdine and four at UCLA.

“Jim Harrick was the biggest male influence in my life,” Fuller said. “I wrote him a Father’s Day note this past year trying to express what he meant to me. I will never be able to repay him for all he has done for me.”

BOUNCING TOWARD EDUCATION
When Tony Fuller returned to Pepperdine as a coaching assistant from 1982-88, he would complete his undergraduate degree and work on his master’s degree in education. He climbed the ladder from graduate assistant to part-time and eventually full-time assistant. The Waves won 112 games in that span and earned three NCAA tournament berths.

In 1988, Harrick got the call to go to UCLA, one of the nation’s legendary programs, and Fuller joined him. He describes the four years there as special, citing everything from the Pauley Pavilion facility to the famed alumni — think Bill Walton, Gail Goodrich, Walt Hazzard, Sidney Wicks and others — who would stop by the coaches’ office.

When Wilt Chamberlain came in one day wanting to know when the weight room was going to be open, Fuller says he was happy to oblige.

The Bruins earned NCAA tourney berths in each of Fuller’s four seasons there, including reaching the Elite Eight in 1992.

Fuller was then hired as a head coach for two seasons at San Diego State and another two seasons back at Pepperdine, before returning to the assistant ranks for a decade at Colorado State, Utah State and Stanford. While with Stanford, Fuller lists four straight victories at the University of Arizona’s McKale Center as a top accomplishment. The Cardinal were regulars in the NCAA tourney, also reaching the Elite Eight one time.

With his son preparing to enter high school, Fuller gave up the life on the road of a college coach and entered the high school ranks. He coached nine years at Brophy College Prep in Phoenix (156-94 record), taking his team to the state title game in 2011. It was a mutual decision, he said, to end his tenure there.

After a year off the bench, Fuller was selected from more than 40 applicants in 2016 to become the new head coach at Maricopa. He spent three years with the basketball program and is in his sixth year overall at the school. He has taught physical education and college career technology, among other courses.

A Maricopa resident since shortly after being named coach, he moved to Province in early 2021. After so many years of traveling and living in big cities, he is happy to stay close to home and feels the community is a really nice place to live.

While basketball has taken him all over the world, he goes back to his Midwest roots in saying, “The fundamentals are much more evident there, and the fan enthusiasm and following are much more intense.”

The lack of execution and the abundance of three-point shots in today’s professional games are troubling for someone with as much coaching experience as Fuller. He enjoys watching the top women’s college teams and the strong fundamentals they bring to the game.
Fuller acknowledged the impact of a career that spans portions of five decades in the game.

“Everything I ever got was through basketball — basketball and education.” 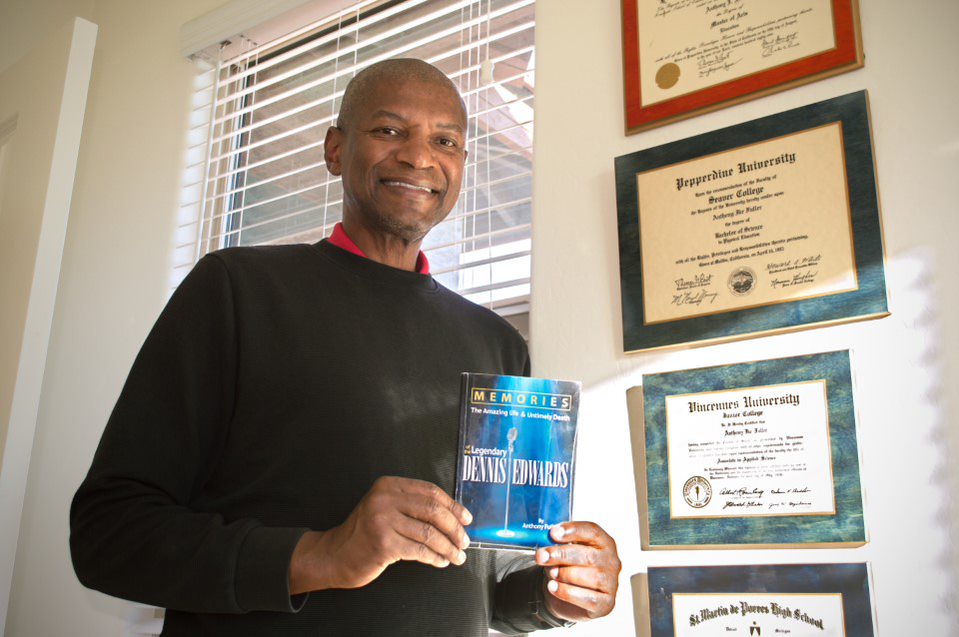 The author has game
Tony Fuller may have spent more than 40 years on the basketball court, but he is quite proud of some work he did behind a computer.

Fuller wrote and published
“MEMORIES: The Amazing Life and Untimely Death of the Legendary Dennis Edwards,” the unfiltered story of a cousin who served several stints as lead singer for the legendary Motown group, The Temptations.

“He died in 2018 under bizarre circumstances,” Fuller recalled. “I just wanted to share our life together and his life. I had no experience in writing. But it’s on Amazon and people like it; they write good reviews.”

A couple of examples:
“This book was an insightful, funny and heartwarming look at the life of the fantastic singer Dennis Edwards. A good book should make you feel different emotions. This book did that for me. Once I started reading, I could not put it down.”

“Author Anthony Fuller captures the highs and lows of the famous life of his cousin, Dennis Edwards in this intimate biography. I devoured the book and found it impossible to put down. Fuller stirs every emotion from anger to deep sadness to laughter through his insightful character development.”

Fuller, who said it took about six months to compile the work, hopes to do more writing once he retires from teaching.

This story was first published in the December edition of InMaricopa magazine.