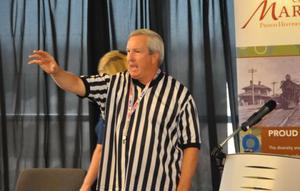 City Manager Kevin Evans told Maricopa residents gathered for a community Town Hall that money for the proposed grade separation at the railroad tracks and state Route 347 had been included into a federal bill.

During the question portion of Saturday’s event, Evans said he had heard word from Washington, D.C., that Rep. Raúl Grijalva, D-Ariz., had written $20 million into a bill to help fund the initial stages of a project to build an overpass or underpass at the Union Pacific tracks for Maricopa’s main thoroughfare.

“I have never seen such a quick reaction to put money in a bill,” Evans said.

Mayor Anthony Smith and other city leaders toured Washington recently to meet with congressional leaders about seeking federal funds for the grade separation.

Despite the good news, there is no guarantee the bill will be approved and Assistant City Manager Roger Kolman said the project has a five- to 15-year timeline at best. “This is a long-term project,” he said.

In addition to the grade separation, other topics that came up at the forum included landscaping and trash along SR 347 and expansion of the Maricopa Xpress transit service.

Evans said the city is aware of the trash problem on the state highway and has made contacts with several parties involved.

“I have received a strong commitment from Waste Management that something will be done to address the trash issue,” he said.

Smith began the two-hour event with a nearly 30-minute presentation on what the city had accomplished since last August, and what the city leaders hope to accomplish in the future.

Completed and future projects that Smith highlighted included the city’s first stoplight, the Pacana Park expansion and the opening of the new library.

Smith also thanked the voters of Maricopa and Pinal County for passing the Parks and Recreation bond as well as the Central Arizona Community College bond back in August.

“These bonds will give the city valuable tools when it comes to developing Maricopa,” Smith said.

“It was a wonderful event and I got a lot of answers to my questions,” said four-year Province resident Nancy Duncan.