The Maricopa school district could announce its new superintendent by late March.

The Maricopa Unified School District Governing Board met with a representative from the Arizona School Board Association Wednesday night to, in part, finalize an ambitious search timeline.

If all goes as planned, the district could welcome a new superintendent after a two-month search.

MUSD is paying ASBA $9,600 to assist in a multitude of tasks related to finding suitable candidates for the public-school district that educates nearly 7,000 students.

The first step in the process will be surveying stakeholders through an online questionnaire. The ‘e-survey’ will be available to parents, district employees and community members on the district website Dec. 8–Jan. 9.

The district plans to use opinions shared from the community about what professional and personal qualities it would like to see in a new superintendent. It’s a step the board did not take during its last superintendent search, said Board President Patti Coutré. 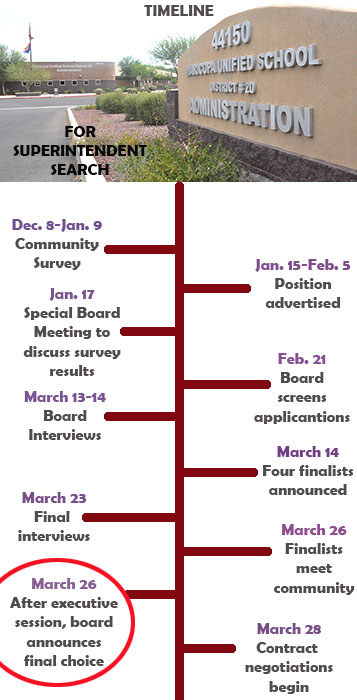 The results of the community survey will be discussed during a special board meeting Jan. 17. Prior to the meeting, the public will have the opportunity to speak with ASBA Representative Karen Gasket about the search during a meet-and-greet from 5:30 to 7 p.m.

The position will be advertised online for potential candidates beginning Jan. 15. The opportunity to apply ends less than a month later, on Feb. 5.

Gasket explained December and early spring are generally the season when districts begin shopping for new leaders. A relatively brief, three-week submission deadline ensures the district will receive applications from candidates in a timely manner, Gasket told the board.

Candidates will be required to complete a 10-page digital application.

The board will meet in executive session Feb. 21 to screen applications. Gasket recommended the board select five to six candidates to interview.

Final interviews will last most of the day on March 23 in private meetings with the candidates.

The district will publicly announce its new superintendent after executive session March 26.

From there, the board will begin contract negotiations with the finalist and the district’s lawyer beginning March 28. The board set a $135,000-$155,000 salary range Wednesday night to include on advertising material for the position.

MUSD expects to officially hire the finalist by April.

The district announced earlier this year it would not renew its contract with current Superintendent Steve Chestnut passed June 30, 2018.