As if putting a stamp on an energetic evening featuring scores of #RedForEd T-shirts, the Maricopa Unified School District Governing Board expressed their support as the teaching staff prepared to join a statewide walkout to change education funding.

Though not specifically expressing support of the work stoppage, the board cited “chronic underfunding” in approving a “Resolution Supporting Educators.”

“[W]e support our school employees as they make their demands known for legislative action to secure the necessary funding for meaningful pay raises and education funding,” the resolution states.

Before the meeting, teachers from MUSD and other local schools gathered at Copper Sky for a rally. They then created “thank you” cards to individuals and organizations that have expressed support.

High school teacher Aidan Balt thanked the board for supporting teachers and student. Then she specifically thanking incoming superintendent Tracey Lopeman and the cabinet for communicating the walkout situation quickly to all families in English and Spanish.

Technology Integration Specialist Christine Dickinson thanked the classified staff of MUSD for their support, calling all of them educators.

“All together we have to do this as a united team,” she said. “This is not about teacher pay. If it was about teacher pay, this would have been resolved. This is about educators united, not teachers, educators. Together as a team we are educators.”

April 12, Gov. Doug Ducey proposed a 20-percent teacher pay raise by the fall of 2020, but state teachers voted to walkout instead, saying it did not do enough for support staff or per-pupil funding.

“While the schools close, the Legislature remains open, with leaders attempting to complete their task to bring the teachers significantly better pay,” Yarbrough said in a prepared statement. “We hear their frustration. Our hope is that the teachers who choose to walk out on their children will return to their classrooms, so that students can learn and complete their school year.” 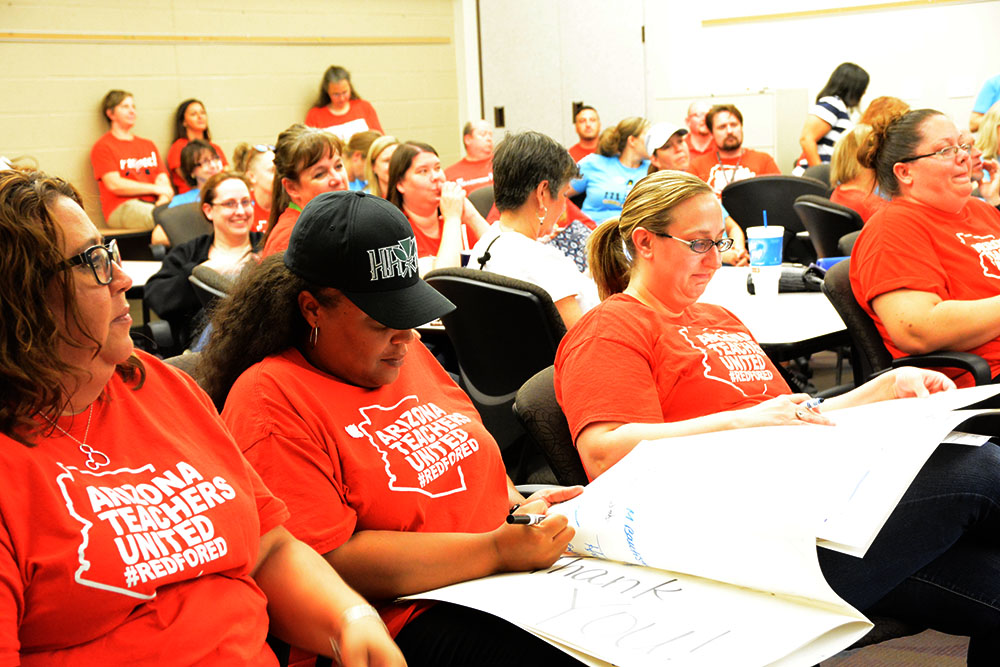