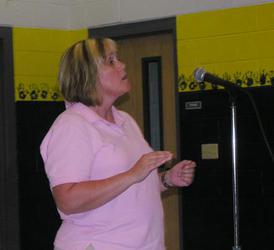 In an effort to address parental concern, the Maricopa Unified School District governing board voted to push back the district-recommended school start times for the 2008-09 schoolyear.

The district for the past month has been trying to get the board to approve start times for the upcoming school year, but the board was hesitant to approve any of these proposals because of the early start time they instituted for elementary students.

“The proposed time by the district is too early for elementary students,” said Patti Coutre, a parent with a child in elementary school. “It is still dark in the winter months at 7: 30 a.m. when kids would be walking to the bus stop and there is a risk that they could be injured.”

Board members agreed with Coutre’s statement and said they felt that the middle schools and high school should be the ones starting earliest.

“When I was in school, which wasn’t that long ago, I had to be there at 7:30,” said MUSD governing board president Shannon Amos.

However, members of the district did not agree that the middle and high schools should start earlier.

“There are lots of studies out there that show us that adolescents’ brains are not completely active for the first hour and a half after they wake up,” said Jeff Kleck, interim principal at Maricopa Unified High School. “With elementary-age students it only takes 30 minutes for them to be fully attentive.”

Kleck said that it is why the high school and middle schools should have a later start time and that he would like it more if they could push the start time back further.

“If anything, we should start the middle and high school students later,” Sharp said.

Having heard the pleas of the district, governing board member Tim White motioned that the proposed school start times be pushed back fifteen minutes.

The concerns that arouse from White’s proposal centered on later lunch times and the class time student athletes might miss because of the later dismissal.

“We have to start serving lunch three hours after the start of school, so by moving the start time up 15 minutes the last lunch would be served at 1:30,” Sharp said.

“Athletics also would be a concern, but we don’t travel much and accommodations could be arranged,” Sharp added.

Typically athletes perform better in school when they are participating in sports because they don’t want to lose their eligibility,” Kleck said. “This should work.”

Despite these concerns, the governing board voted to adopt the school start times as amended by White.

“You can’t please everybody all the time, but this schedule looks out for the safety of the children and that is what’s important,” said board member Jim Chaston.

Here are the start and release times for the upcoming school year: