A school policy updated in April has had unintended consequences at Maricopa High School this fall, and a room full of students and their parents explained the impact during Wednesday’s meeting of the Maricopa Unified School District Governing Board.

At the request of board member Torri Anderson, the board held a work study on the implementation of Policy IIE, which states:

“It shall be the responsibility of the principal, with the cooperation of assigned counselors, to assist students in the scheduling of classes. All students in the high school, with the exception of graduating seniors, are required to enroll in six (6) credit-bearing classes.

Graduating seniors are required to enroll in the minimum of five (5) credit-bearing courses. Seniors wishing to participate in extra-curricular programs must adhere to Arizona Interscholastic Association (AIA) guidelines.”

Superintendent Tracey Lopeman said she had made an error in the implementation of the policy. It was meant to be in place for this year’s incoming freshmen and future classes rather than students already in high school.

Anderson called it a communications breakdown and said it should not have happened. Students said it was forcing them to choose between their church and school activities.

Eric Goettl, instructor of the Seminary program of the Church of Jesus Christ of Latter-day Saints, earlier said the way the policy was implemented has “negatively impacted our youth and our ability to offer release-time religious education in an off-campus setting.”

Before Tuesday’s meeting, however, Goettl had a fruitful discussion with Lopeman about the situation. Currently, 150 students from MHS and other high schools attend Seminary in the church across the street from MHS for an hour during the school day.

MHS offered Odyssey courses outside the regular class schedule, during Zero Hour or Eighth Hour, for those students wanting to meet the required enrollment hours and still take time for Seminary. However, students said those course options did not include Advanced-Placement classes and they could not make up the lost credit as well as they did before. The long school day was also leaving students exhausted, they said, especially those trying to be involved in extracurricular activities or after-school jobs. 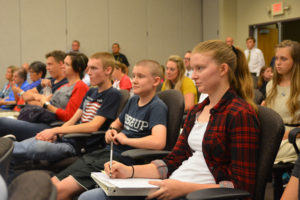 “I just panic all the time and am stressed out a bunch of the time, too,” student Kyle Jones said. “It’s really hard to keep up. I’m really surprised I’m only a few assignments behind in the class.”

Lopeman had discovered the discrepancy between policy and practice at the high school after some teachers raised the question about “weighted” grade point averages that gave higher results to students taking fewer classes and finishing higher in the class standings. Lopeman said the six-credit-bearing-classes policy has been in place for “quite a while” but had not been in practice at MHS. On the other hand, the previous policy had required seniors to take just four credit-bearing classes while in reality they were taking five.

“They have to take five because of early-release Wednesdays,” she said.

“I understand that this change was to make sure that we have all of our credits to graduate,” senior Katie Hanks said. “I know every single one of us knew as a freshman coming in that we would have to make up that credit. This hasn’t been a problem in the past and so it shouldn’t be a problem today.”

Hanks outlined her day, which included heading off to Zero Hour before 6 a.m. and coming home at 7 p.m. or later. Only then, she said, did she have time to do homework for her many AP and honors classes. Haley Lemon, president of the MHS Theatre Company, said its even worse for students in Tech Theatre, who may not get home before 10 p.m. when preparing for a production.

“It’s my understanding that a lot of this came to fruition because of some discussion or some concern about weighted GPAs and valedictorians and that kind of stuff,” Bishop Ryan Atwood said. “I’m sure there’s much more complexities than that. But I can tell you, the current solution is not acceptable.”

The GPA calculation was at the center of discord and will be part of the discussion as the district tries to work out a solution.

“I get it, the GPA boost that we got when you divide it by less number of credits,” student John Jackson said. “I know some of my member friends would talk about it in freshman year how, ‘Wow, we’re first in our class because of this GPA boost.’ But now, I’d argue, without the ability to take AP credits and honors credits A Hour or Eighth Hour and do it online, our numbers will have lower GPAs instead of the little bit higher GPA they had prior.”

The use of only the Odyssey program for online credits is also part of the conversation. Questioned by Board Vice President Ben Owens, Lopeman said the single program was adopted for consistency. After hearing from students, she said Odyssey is not adequate.

James McNelly and his mother Sue both explained how the implementation of the program had thrown off his plans after he adapted his schedule to fit in release-time Seminary.

“I have planned for graduation since my freshman year. I had taken a lot of my classes on Primavera, and these classes suddenly don’t matter because of this policy,” he said. “I just think it’s unfair that as a prepared individual, I can’t use those credits I’ve already taken. Now I’m in a Zero Hour class. I have to get up at 5:40 every morning. Getting kind of tired of it.”

Sue McNelly said her son had completed the credits necessary to make up for the time lost to Seminary his junior year. “And he was good to go. The district then changed the policy, and we were told those credits no long count.”

Anderson said not accepting online credits from other programs was “very disturbing” and said it was not explained when the policy was forwarded to the board. She also said the understanding was that the policy would affect incoming freshmen.

“I am very disappointed in the implementation of this policy,” she said. “I’m disappointed it’s affected this many families. We want these students in our schools who are honor students, who are civically responsible. This is what we build our public education system on. I am confident we will resolve this to the benefit of all of our children.”

Anderson also said the consequences should have been spelled out during board discussions over the summer before school started.

Several students spoke of the value of the Seminary class to them personally.

“You may be thinking if I didn’t take Seminary I wouldn’t have this problem at all,” Hanks said, “but I value my hour in seminary because I know it will help me throughout my entire life, and I want to go and learn what I can in that class.”

Johnna Belcher, the mother of three young children said she was concerned about the problems of accommodation. “This policy change is troubling for me as a parent. I attended Seminary when I was a youth. It was a place for me to be able to decompress during stressful days, and I know that a lot of days are stressful these days.”

Parent Tyler Wright said he has seen kids, including his daughter, on the verge of having a nervous breakdown trying to juggle school, homework, activities and some social life with the policy change.

“There’s has to be a way to allow these kids to play sports,” he said. “If they want to be the valedictorian, then let them fight it out. Let them work hard and earn it. Don’t give it to someone. That’s not right. They do not need to be burned out. They need to be educated.”

Board member Patti Coutre expressed empathy for parents dealing with stressed-out teens but also said it may come down to personal decisions.

“I know it is tough to make choices between what to do after school, wanting to participate. Sometimes those choices are going to be tough and you might have to choose to do Seminary versus theater or football or any other athletics,” she said. “It’s a lesson that’s hard to learn. I’m sorry you have to learn it as a kid, but you’ll be better rounded as an adult when you have to make those choices as an adult.”

Anderson said it wasn’t just LDS Seminary student impacted by the policy change. Her son, a senior, had expected to have a lighter load this year with maybe time to get a job but instead found himself at school five credit hours. She said that was true of seniors across the board.

Lopeman said in implementing the policy, Principal Brian Winter and counselors spoke with students they thought would be most impacted. The district also prepared to approve stipends for teachers to teach during Zero Hour and Eighth Hour.

“Zero Hour and Eighth Hour were added so students could continue to attend Seminary during the day,” Lopeman said. “We didn’t want to eliminate that option just blanketly. We wanted to create a transition.”

She said it became clear in her discussion with Goettl and his wife that following policy and community service did not have to be mutually exclusive. She said she is confident a solution can be found that is fair for all. Other elements of the issue include MHS’s closed-campus status and liability.

What was unclear was whether the district’s policy of six credit-bearing classes was based on state law, which requires 720 educational hours for high schoolers. That will be part of the research behind future conversations, prompting board member Joshua Judd to warn parents, “When we get these policies, it’s statewide. It’s not a flexible thing if it’s state-based.”

Anderson said she hopes to work out a resolution before Christmas so the conflict is not still in place next semester.

Board President AnnaMarie Knorr said she wants to see something evenhanded. “I want to be sure that whatever we do going forward is fair and equitable both for the students who do not leave campus and go to Seminary, that their GPAs aren’t less just because of that fact, but also for those who do, that they have the opportunity to take AP classes or honor classes or whatever it is to get the GPA that they want. It needs to go both ways. I’m hopeful that we can come up with a solution that does ensure that.”

MUSD may delay start of school

MUSD preps options tonight for coming back to school